“Soldiers Returned. Mayor Platt and others of this city yesterday made every effort to ascertain if there were any Bellevillians of the first contingent, who were returning home, but their efforts proved fruitless. A few of our boys did however arrive here at an early hour this morning, but the time of their arrival was not announced and a reception could not be accorded them.

They were, however, not members of the first contingent, in fact some had only been overseas but a short time. Those from the city and vicinity who arrived were Sergt. MacDonald, Privates G. Ward, S. Ray, G. Gorman, Gunners Hopkins, McBride and Privates Coughlin, A. Chapman, Pte. Kiser, O’Brien and Sanders.”

“Depositing of Colors. At the morning service at St. Thomas’ Church on Sunday April 28th the colors of the 80th Battalion will be deposited in the church for safe-keeping. His Lordship Bishop Bidwell of Kingston will be present and conduct the service, which will be of an impressive nature. The colors, it will be remembered, were the gift of the Ketcheson families in this district to the battalion previous to going overseas.”

“Flood Conditions. At the hour of 2  o’clock this afternoon there was scarcely any change to note in the situation of that portion of the west side of Front Street flooded yesterday owing to the water in the Moira River overflowing its banks on account of the ice jam. The ice was still held intact at the footbridge but it was apparent that a break was liable to occur at any time. This field of ice extends from the foot bridge to some distance beyond the upper bridge.

From Lazier’s mill on the Canifton Road to Corbyville there is a considerable field of ice and this is liable to come down at any time. Should it arrive before the present jam has been carried down to the mouth of the river more trouble and inconvenience will certainly ensue.

Pedestrians on the west side of the river to-day were compelled to reach Front Street either by way of the upper or lower bridge as water to a depth of two or three feet is in the gangway leading to the foot bridge from Front Street. During last night the jam of ice moved slightly, but was held owing to the firm condition of the ice just below the lower bridge. Back yards from the foot bridge to the upper bridge are still covered with water as are many of the basements of stores in that section. Some of the merchants were compelled to have stoves placed in their stores as furnaces were extinguished by high water.” 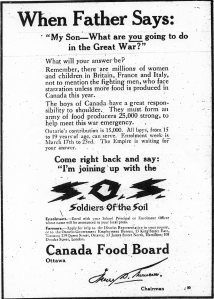 “When Father Says: ‘My Son—What are you going to do in the Great War? What will your answer be? Remember, there are millions of women and children in Britain, France and Italy, not to mention the fighting men, who face starvation unless more food is produced in Canada this year.

The boys of Canada have a great responsibility to shoulder. They must form an army of food producers 25,000 strong, to help meet this war emergency.

Come right back and say: ‘I’m joining up with the S. O. S. Soldiers of the Soil.’ Canada Food Board, Ottawa.”

“With the Foresters. Capt. Fleming has received an interesting letter from his son, Lieut. Alan S. Fleming on active service duty in the Forestry service overseas. Lieut. Fleming went overseas in April 1916 with 1,600 men and the force has been increased to 1,800 and is rendering valuable service to the cause of the Allies. He received his commission overseas being promoted for merit and is now on the personal staff of Gen. MacDougall, Officer Commanding.

Lt. Fleming speaks very highly in his letter of the military record and the personal popularity of Capt. ‘Bill’ Schuster who has been in charge of the traffic department of the Forestry Unit since it arrived in the Old Country and was so successful in that capacity that he was promoted from Lieutenant to Captain with good prospects of a Majority.

Capt. Schuster is at present home on furlough and expects to return to active duty in the near future. Capt. Schuster is highly esteemed by the military authorities overseas as a capable officer and his unfailing good nature and cheery optimism has won him great popularity with the men of the Forestry Unit rank and file. Lieut. Fleming speaks very highly of Capt. Schuster’s kindness to him.”

“Knights of the Air. Never since the world began have valor, bravery and dash been held so high as they are to-day, among the men of the R.F.C. Heroes all, and comrades staunch, fearless as the knights of old, to be with them inspires young men of spirit to be like them, courageous, noble, strong.