“A special meeting of Hastings County Council was convened in this city yesterday, presided over by Thos. Montgomery, Reeve of Rawdon township. The meeting was called in pursuance of a proclamation of the Lieut.-Governor of Ontario, calling County Councils together for the purpose of discussing the all important matter of greater food production.

At the opening session Mr. J. H. Yeomans, representing the Organization of Resources Committee of the Province of Ontario, addressed the Council on the aims and methods for increased production. One of the principal crops required this year is wheat, and every farmer is asked to sow at least five acres of wheat above that sown in previous years. …

In regard to seed wheat the department has purchased 50,000 bushels of Marquis spring wheat, the most desirable kind for Ontario, to supplement the supply of seed already in the province. The seed will be distributed to various centres throughout the province in car-load lots, and from these centres will be shipped in smaller quantities to individual farmers. …

Mr. D. V. Sinclair asked for a grant of $10,000 from Hastings County Council for Y.M.C.A. war work at the front. The speaker stated that that amount had been apportioned to this county. Mr. Sinclair gave a detailed account of the use the money would be put to. …

“Equal Privileges Equal Sacrifices. Canada’s war government could hardly have stopped at selective conscription of man power. Selective conscription of wealth, on the basis of ability to pay, was a corollary that sooner or later had to be adopted as an integral part of our war machine. And so the income war tax came into being.

Penalties have been provided for non-fulfilment of the provisions of the act. But the Canadian people are a unit in their determination to carry the war to a successful conclusion and it is not anticipated that these will have to be invoked in the application of this most necessary measure.”

“Canada To Comfort Devastated Vimy. There is pride and pleasure in Canada’s active participation in the rebuilding of stricken France, but the imagination is particularly touched because the town we selected through the Secours National has been granted to us and that town is one where Canada won her greatest laurels in April, 1917. …  In the hands of the Secours National that has done so much work for the French Red Cross, we can be assured that no effort will be spared to plan the new town most carefully and to raise a fitting memorial, providing funds are forthcoming.

Contributions so far have been generous, because the object appeals so strongly to those who have had relatives or friends fallen in the fight, but it must be remembered that only by the united effort of the whole people can the scheme be made completely successful.”

“Vacant Lots and Back Yard Gardens. By Frederick Abraham, Chairman, Vacant Lot and Back Yard Garden Section, Canada Food Board. The production of food was never of more vital importance than in the year 1918. The food situation of the world is not only grave today but it will be increasingly so during the progress of the war and for a considerable time thereafter. …

The workers should be grouped on land as near their homes as possible. In this connection it will be found that, except in rare cases, the average individual, otherwise employed, has only sufficient time and strength to cultivate a lot 50 x 100 feet. It is desirable that the growth of standard vegetables only should be encouraged such as potatoes, beets, carrots, peas, beans, lettuce, onions, parsnips, etc. These are high in food value and are easily grown by those who will volunteer for this work, many of whom will be amateurs. …

It is the intention of the Board to again prohibit the eating of canned vegetables, in Eastern Canada to October 15th, in Western Canada to November 1st, 1918. This will further emphasize the necessity of garden production on the widest possible scale.

In many places very effective work was done by the firemen and the police. Their gardens were often models in this connection and an incentive to other groups.” 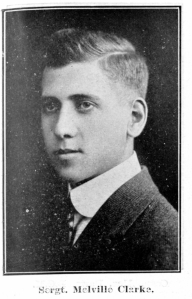 “Corp. Clarke Returning. Mr. and Mrs. W. P. Clarke, 93 Front Street, received a telegram last evening from their son, Corp. E. Melville Clarke, stating that he had arrived at Halifax, and would be home in a few days. Corp. Clarke is one of the ‘Firsts’ having left Belleville in August, 1914, under the command of Lt.-Col. O’Flynn and Major Ponton with whom he served in the ‘Fighting Second,’ and afterwards under the late Cap’t. ‘Billy’ Hudson.

He took part in all the engagements of this battalion for over two years, when he was forced to leave the line owing to a breakdown in his health and has since been attached to the staff of Bear Wood Convalescent Hospital, Wokingham, England.”

“Inconvenience to Residents. Residents in the western portion of the city were last night inconvenienced to a considerable extent owing to the flooded conditions of the streets. The warm weather yesterday caused a heavy flow of water from off Coleman flats, and this flowed over Boswell Street and Moira Street to a depth of a foot, making it impossible for pedestrians to navigate Coleman Street.

Henry and Catherine Streets were also flooded to such an extent that residents in order to reach their homes had to be conveyed in vehicles which were kept in operation until the close of the entertainment in the Opera House. The situation today was much improved.”

“Young Hero Honored At Stirling. An important ceremony took place at Stirling last evening in the presentation to Mrs. Ida Bedell of the Military Medal won by her soldier son, Pte. W. F. Bedell, who gave his life for his King and country at the battle of Passchendaele, after winning distinction for outstanding bravery on the field of action which was rewarded with royal recognition. Mrs. Bedell, the mother of the young hero, resides at Harold, but the patriotic citizens of Stirling arranged a public ceremony.

The Stirling Town Hall was filled to the doors, and the ceremony was solemn and impressive. Brigadier General T. D. R. Hemming of Kingston, made the presentation, and spoke with deep feeling and eloquence of the heroic deeds of the young soldier, who gave his life so gallantly in the great cause of world freedom.

Lt. Col. E. D. O’Flynn, of Belleville, made a stirring patriotic speech with eloquent reference to the heroism of the young soldier. Dr. Bissonette of Stirling, also spoke feelingly and the chair was ably filled by Thos. Montgomery, Reeve of Rawdon Township, and Warden of Hastings County. A musical program was also given.”

[Note: Lance Corporal William Frederick Bedell died on November 24, 1917. He is commemorated on Page 199 of the First World War Book of Remembrance.]

“Heed The Call BOYS! This is your opportunity to serve your King and Country—Enlist right now in the S. O. S. Soldiers of the Soil.

You couldn’t look the boys who are going straight in the eye if you proved a slacker in this emergency. 25,000 boys are wanted in Canada—15,000 from Ontario—from 15 to 19 years of age.

Thousands of Ontario boys made good on the farms last year and earned from $12.00 to $30.00 a month and board. You can, too. A Bronze Badge of Honour will be awarded for three months’ service—Show your mettle by earning the right to wear this war decoration.