“Memorial Meeting in Christ Church Commemorated Sacrifice of Members of Orange Order. In pursuant to the resolution unanimously adopted at the last annual meeting of the Loyal Orange Grand Lodge for Ontario East, that the first Sunday in September be commemorated as a memorial day in memory of brave brothers, who have made the supreme sacrifice, the day was observed in Belleville by the brethren of Benjamin Lodge No. 274 and Belleville Lodge No. 2519.

In the evening the members marched to Christ Church, where an impressive and appropriate service was held, conducted by the Rector, Rev. Bro. Rural Dean Swayne assisted by Rev. Bro. A. L. Geen. A large congregation was present.

Three members of the local lodges have given their lives for King and Country, namely Bro. W. H. Hudson, of Belleville Lodge and Bros. Privates Fred Cobourne and Ernest G. Brown, of Benjamin Lodge whose names were read out by the Record. Special prayers were said and the hymns were in keeping with the occasion. …

“Shortage of Woolens Hits Canada Tailors. The tailors of Canada are going to be hard hit this season to obtain woolens to meet the demands of the custom tailoring trade, for the simple reason that the British mills are not producing the goods. The situation in the British woolens market is very grave and the Canadian requirements are going to be obtained with the greatest difficulty—if indeed at all—and at any price.

The shipping is very uncertain, marine insurance is greatly advanced, the war and freight rates have increased abnormally. At the mills the expert weavers and spinners have been unremittingly ‘combed’ for military service. Operations are practically being carried on by unskilled labor, and it is hard to make even a guess at what the ultimate issue will be unless conditions change.

It may yet be a case of being compelled to wear the plain grey standardized cloth that Great Britain is using herself. Just for the present Canadian people will have to be satisfied with just what there is to be had and will have to pay the maximum prices at that.” 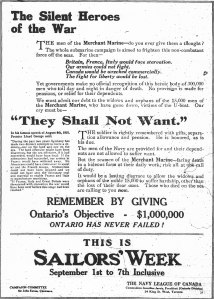 “The Silent Heroes of the War. The men of the Merchant Marine—do you ever give them a thought? The whole submarine campaign is aimed to frighten this non-combatant force off the seas.

It would be a lasting disgrace to allow the widows and orphans of the noble 15,000 to suffer hardship, other than the loss of their dear ones. Those who died on the sea are calling to you now.

This is Sailors’ Week September 1st to 7th Inclusive. The Navy League of Canada.”

Pte. Miles left Belleville with the 155th Battalion, and had been for some time at the front.”