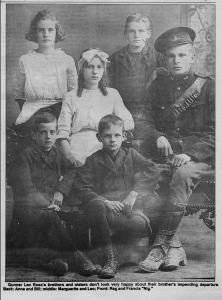 “Leo Ross Killed in Action at Langemarck. Mr. James Ross of this city, to-day was officially notified that his son, Gunner Leo Ross, had been killed in action. Gunner Ross was a member of the 34th Battery and went with the First Contingent. His many friends will regret to learn of his demise and sympathy will be extended to the bereaved parents and members of his family.”

[Note: Gunner James Leo Joseph Ross died on April 30, 1915. He is commemorated on Page 34 of the First World War Book of Remembrance.]