“The Special Appeal For Red Cross. In response to the appeal by the British Red Cross Society, Belleville City Council has arranged to have subscription lists placed in convenient and prominent positions throughout the city. The citizens who desire to contribute to this worthy object in response to the urgent appeal made through the press, will have an opportunity to do so to-morrow, October 21st, and following days.

The City Council has headed the list with a donation of 300, and the members of the Council have each put down their names for a subscription. The city clerk has consented to receive and forward the money. It is suggested to save time, that money be left when lists are signed. Lists will be found (by permission) at the following places: City Clerk’s Office, Montreal Bank, Merchants’ Bank, Standard Bank, Dominion Bank, Bank of Commerce, Union Bank, Post Office, Station Post Office, Intelligencer Office, Ontario Office.” 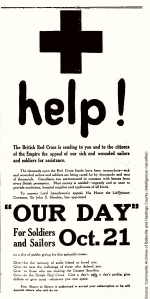 “help! The British Red Cross is sending to you and to the citizens of the Empire the appeal of our sick and wounded sailors and soldiers for assistance. The demands upon the Red Cross funds have been tremendous—sick and wounded sailors and soldiers are being cared for by thousands and tens of thousands. Canadians, too, are succored in common with heroes from every British possession. More money is needed—urgently and at once to provide medicines, hospital supplies and appliances of all kinds. ‘OUR DAY’ For Soldiers and Sailors Oct. 21.”