“Very Pleasant Military Dance. About 100 couples tripped the light fantastic till the early hours of this morning at the dance in Johnstone’s Academy, given by the Sergeants and staff sergeants of the 235th Battalion, C.E.F. last night. The dance was most successful in every way and sergeants have every reason to feel proud of the splendid results of their initial dance to be held in this city, many more of which will follow during the winter months.

Many out of town guests were present, also several sergeants of the 254th Battalion and an officer of the 253rd Battalion, Kingston. The dance was well patronized by the officers of the 235th Battalion, which is evidence of the good working spirits between the N.C.O’s of the Batt. and the officers. …

The room was tastily decorated with Union Jacks and Battalion pennants. This work being undertaken by the ladies of the committee who have taken a deep and appreciative interest in the boys of the 235th Battalion since the day they arrived in the city. …

The splendid orchestra was supplied by the 235th Battalion Band under the leadership of Band-Sergt. Merchison. Several of the sergeants spoke in very high praise of the work the ladies had done on their behalf, and also Mr. and Mrs. Johnstone who were very active in the arrangements and were in no small way responsible for the successful evening. …  At midnight refreshments were served after which dancing was resumed until the early hours of the morning.

It is the intention of the committee of the sergeant’s mess in course of a few weeks to hold a regimental whist drive and dance, which will be open to all, and no doubt will be as successful as last evening’s function.” 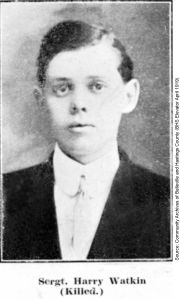 “Belleville Boy Missing. Mr. Delos Watkins residing on the corner of Queen and John streets, Belleville, this morning received a message from the Record office, Ottawa, stating his son Sergt. Harry Watkins had been missing since November 18th.

He enlisted with the 38th Battalion and was for some time at Bermuda and was also at the Dardenelles, but of late had been at the front in France. His many friends in the city will hope that he is alive and that his whereabouts may be ascertained.”

[Private Harry Thomas Watkin died on November 19, 1916. He is commemorated on Page 179 of the First World War Book of Remembrance.]

“Hockey. Only One Intermediate Team. An adjourned meeting of those interested in hockey was held last evening at Hotel Quinte and a number were in attendance. The chief object of the gathering was to consider and determine what was to be done in reference to placing an intermediate team in the O.H.A. independent of the 235th Battalion intermediate team which is already an established fact.

After some discussion it was decided not to enter another intermediate team in the O.H.A. It was felt that it would not be wise to have two intermediate teams, civilian and military, and it was thought better to combine with the team representing that unit.

The soldiers contend that they have excellent material, and it is felt that with the support of the citizens the 235th team should make a good showing in the O.H.A. and uphold the reputation of this city, whose team was last season’s runner-up.”

“The Battle of the Somme. ‘The greatest moving picture in the world.’

King George V, who says the picture of The Battle of the Somme should be seen by all.

The wonderful moving picture of the Battle of the Somme is endorsed by the Commanders.”

“The Soldier’s Family Is It Overpaid? No! A thousand times, no! Yet unthinking people, learning that Mrs. Smith, or Mrs. Jones, or Mrs. Robinson is getting from the Government and the Canadian Patriotic Fund, fifty or fifty-five dollars a month, complain that this poor woman is better off than when her husband was home—the Patriotic Fund, therefore, must be wasting money!

Is that a proper attitude? Do the people of Canada wish the administrators of the Patriotic Fund to keep the families of our soldiers close to the starvation line, but not so close, of course, as to be in danger of falling across? No! A thousand times, no!

The aim of the Fund is to maintain each family in a state of comfort equal, at least, to that to which it has been accustomed. If in cases, perhaps of families that through a husband’s improvidence have never been properly housed, fed or clothed, this standard is raised, who will condemn the Fund? Shall we keep those who are down, down? Or shall we try to bring those who are down, up?

The woman has given her man to the country. She has done what she could. Her consent was necessary before he enlisted. She gave it. …  Is our paltry silver and his precious life to be placed in the scales over against each other? No! A thousand times, no!”