“Man Power of Dominion to Be Ascertained. Upwards of 150,000 letters have been dispatched by the National Service Commission to chief magistrates, lawyers, doctors, clergymen, school teachers, heads of fraternal societies and associations, members of Parliament and of legislatures throughout the whole Dominion, asking for their co-operation in registration of man power of Canada on cards to be distributed by postmasters.

Clergymen are requested to appeal to their congregations next Sunday. School teachers are asked to call their pupils together and explain claims of National Service Board and thus carry the word home to their parents. …

The Committee is asking that the first week of the New Year be observed as ‘national service week’ for taking of inventory. …  It is expected that fully one million and a half replies will be received from the adult males still left in Canada, each one signifying his present occupation and whether he would be available for other forms of national service should it be necessary or advisable.

These replies will be collated by a large staff at Ottawa and the inventory of the manpower will be analyzed with a view to securing its best distribution and utilization. This work, it is estimated, will take fully four months.”

“Mrs. James Lake, of Sidney Township, received the following letter regarding the death of her son, Private Eugene Lake, of the 80th Battalion, whose life was sacrificed while he was doing his bit at the front:

47th Canadian, B.E.F., France, Nov. 21st, 1916. Dear Madam—I would have written to you before, but have only just come out of the line to a place where letters can be written. While I hesitate to intrude on you at this time, I thought you would like to hear further particulars regarding the death of your son Eugene, who was in my platoon, and for whose intrepidity and coolness in danger I always had the greatest admiration.

Our battalion on the night your son was killed, had succeeded in capturing from the Germans a section of trench that had made trouble for some weeks. …  Owing to the heavy casualties we were called up, and your son volunteered with others to go out to an advanced post in front of the captured line, where we dominated by machine guns and rifles any line of advance from the Germans for a counter-attack.

It was shortly after dawn that your son was killed. He was shot through the heart by a German sniper. His death was instantaneous, and he lies buried, with many of his gallant comrades at a spot which will later be identified for you by the graveyard records commission. Eugene was a fearless and gallant soldier, and he died a gallant death.

It will help you to bear your loss to know also that our night’s effort and sacrifices were not in vain. The Germans have not since been able to get the trench we took from them that night. I beg to remain, Yours sincerely, Lt. F. Phillips.” 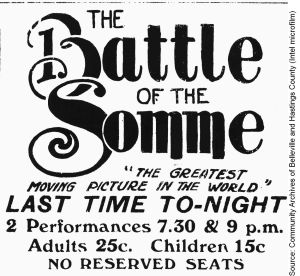 “Battle of Somme Pictures a Success. Great crowds thronged Griffin’s Opera House last evening to witness the Battle of the Somme pictures. The film was given three showings during the evening and each time the building was filled to capacity, by an audience which was loud in their applause of the pictures depicting the conditions under which the great British advance on the Somme front was made on July 1st, 1916.

The film has left out nothing showing the dead and dying on the field, the unfortunate wounded being brought into the dressing stations and being bandaged up, before proceeding to hospitals or back to their places on the front line.

German captives, all bearing a vacant look caused by the ceaseless British bombardment of their trenches and very ill clad are shown being led in by the ever smiling British Tommy, who distributes cigarettes among their captives. …  The Battle of the Somme film is one that should be seen by all as it brings home what war really is, and portrays the conditions under which our brave soldiers fight.”