“Be Ready With Your Dollars. Tomorrow Is The Day and $75,000 The Mark. Tomorrow is the appointed time. The testing time of our City’s patriotism. Belleville has had countless magnificent and sad proofs of the soul-stirring bravery and patriotism of her sons on the battlefields of France and Belgium. Fighting—bleeding—and dying to keep alive the spirit of Freedom in the world. Not only for who are living in comfort at home now; but for future ages to look back upon, and to pour their blessings upon the memory of those stalwart hearts that braved the torments of hell throughout these years, it will be with feelings of glorious pride that they sprang from such stock. …

Tomorrow—Feb. 21st,—Tomorrow our patriotism will be placed on the scales. Its weight will be measured in Gold. Will it measure up to the Flesh and Blood that has passed the test? Citizens of Belleville THINK—think of this before writing your names on the cards that will be handed to you tomorrow. …

CAMPAIGN NOTES. Energy and enthusiasm rule supreme in the Campaign Headquarters. If the Citizens generally show one half the interest that is being shown by the Committee, a most magnificent success is assured. …  Anyone wishing to buy an automobile. Now is the time. $50.00 will be given to the Patriotic Fund for each Machine sold at Headquarters.” 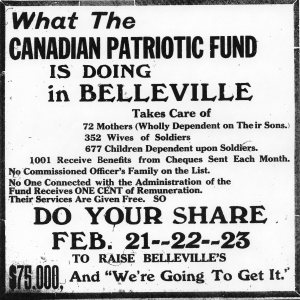 “Have You Ever Felt the Pangs of Starvation ??? You Would Have That Experience if the Germans Came! So PAY! PAY! PAY! For the Boys Who Are Blocking Their Way. Feb. 21, 22, 23. Patriotic Fund Campaign.”

“What Will It Be YOUR Money or Your Life ?? Your Country Needs Both. If You Won’t Give Your Life For Your Country Give Your Money To Help Those Who Are Giving Their Lives. February 21, 22, 23. Patriotic Fund Campaign.”

“How Would You Like To Spend These Pleasant Nights In The Trenches? ???? Think Of This From Now Until February 21, 22, 23 Then Dig Down Deep For The Boys Who Are Doing This For YOU.”

“What The Canadian Patriotic Fund Is Doing in Belleville. Takes Care of 72 Mothers (Wholly Dependent on Their Sons), 352 Wives of Soldiers, 677 Children Dependent upon Soldiers. …

“No Commissioned Officer’s Family on the List. No One Connected with the Administration of the Fund Receives ONE CENT of Remuneration. Their Services Are Given Free. So. DO YOUR SHARE FEB. 21—22—23 to Raise Belleville’s $75,000, and ‘We’re Going To Get It.”