“War Considered Certain. The entry of the United States into the war is now a foregone conclusion. The President yesterday asked Congress to declare that a state of war exists. He also urged the raising of half a million men by universal military service. No action is to be taken against Germany’s Allies at the present time.

While the President was preparing to meet Congress the news arrived that one of America’s armed merchantmen, the steamer Aztec, had been torpedoed and sunk by a German submarine in the prohibited war zone.” 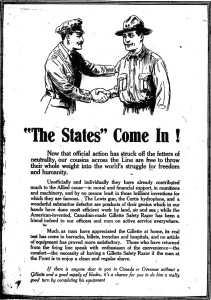 “ ‘The States’ Come In! Now that official action has struck off the fetters of neutrality, our cousins across the Line are free to throw their whole weight into the world’s struggle for freedom and humanity.

Unofficially and individually they have already contributed much to the Allied cause—in moral and financial support, in munitions and machinery, and by no means least in those brilliant inventions for which they are famous. The Lewis gun, the Curtis hydroplane, and a wonderful submarine detector are products of their genius which in our hands have done most efficient work by land, air and sea; while the American-invented, Canadian-made Gillette Safety Razor has been a friend indeed to our officers and men on active service everywhere.

Much as men have appreciated the Gillette at home, its real test has come in barracks, billets, trenches and hospitals, and no article of equipment has proved more satisfactory. …

If there is anyone dear to you in Canada or Overseas without a Gillette and a good supply of blades, it’s a chance for you to do him a really good turn by completing his equipment.”

“Low Physical Showing of Many Recruits. Kingston Whig. Due to the fact that special physical qualifications allow a great number of men into overseas battalions such as forestry, etc., and the fact that many who are under age may be transferred to the Special Service Company, there are nevertheless a great number of men who are being lost to the service through being medically unfit. Every day a certain number is discharged for this reason. The explanation, of course, is that in spite of constant urgings on the part of headquarters here there are medical practitioners throughout the district who persist in passing men who should not be taken on the strength of any unit. …  Since Friday last and not including to Friday, there have been eighty-nine men discharged—a high percentage when compared with the number of recruits secured.