“Belleville Khaki Club. The Khaki Club was opened in November 1915 for the men of the 80th Battalion, later for the men of the 155th and 235th. The officials have been waiting for orders from Lt.-Col. Allen, the Officer Commanding 254th Battalion to open the Club and regret exceedingly that Col. Allen’s latest order is not to do so on account of the probability of the Battalion leaving Belleville within a few days.

The Khaki Club is maintained in the following manner: The rent is paid also insurance, piano rent free, etc., by twelve ladies; note paper, ink, etc. also provided. The Club is practically handed over to whatever battalion is in town for the exclusive use of the N.C.O.’s and men. The proceeds of the Canteen go back into the Regimental Fund; on Wednesday evenings a musical programme is given and free refreshments are served. A Battalion Sergeant lives at the Club and is in charge.”

“Killed in Action. Two members of the 155th Battalion who enlisted in Marmora and trained here a year ago, have been killed in action. They are David Emmorey and Jas. Caldwell.

Pte. Emmorey is survived by his mother and two brothers, Matthew and Bert.

Pte. Caldwell’s home was in Rawdon township. The relatives of both have the sympathy of the community in their bereavement.

Corp. Monto Bertrand, who went overseas with the 80th Battalion, has been reported wounded. Marmora Herald.”

[Note: Private David Belford Emmorey died on April 9, 1917. He is commemorated on Page 234 of the First World War Book of Remembrance.]

[Note: Private James Caldwell died on April 9, 1917. He is commemorated on Page 211 of the First World War Book of Remembrance.] 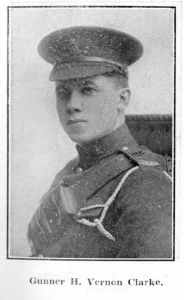 Presented with Pens. Corp. Vernon H. Clarke and Bombardier Bullock, of this city, who are members of the Cobourg Heavy Battery were last night the recipients of fountain pens from the Epworth League of Bridge Street Methodist Church, of which Society they were officers. To the presentation suitable replies were made. Since joining the battery their worth has been recognized by the commanding officer as Mr. Clarke was made a Corporal and Mr. Bullock a bombardier. Previous to enlistment the young men were popular teachers in the Belleville schools.”

Pte. Smith was a Belleville boy, who lived with his aunt, Mrs. Fred Oram, Gilbert Street, ‘College Hill.’ Roy Smith as he was better known, was a former employee of the Wm. Davies Co., Ltd. before coming to Toronto, where he enlisted with the 169th Battalion and left for overseas last October. He was very popular among the young people and will be deeply mourned by his hosts of friends both in Belleville and Toronto.”

[Note: Private Alexander Daniel Smith died on April 11, 1917. He is commemorated on Page 327 of the First World War Book of Remembrance.]

“The regular monthly meeting of the Women’s Red Cross and Patriotic Association was held on Tuesday evening May 1st. Mrs. O’Flynn acting President presided. The Secretary’s report was read and adopted. A letter thanking the Association for socks was read from Capt. F. M. Brown. Also a very interesting letter from Nursing Sister Jessie Morrice who received supplies for the Canadian Hospital in France where she has been stationed, but is now in a Convalescent home in London. The letter describes the work of transporting the patients from the clearing stations, then crossing the Channel to England and from boat to train in London and then to the different hospitals.

Cards have again been received from the Belleville boys, prisoners of war in Germany, thanking the Association for parcels of food and clothing.”

“Queen Mary’s Needlework Guild, Friary Court, St. James’ Palace, S. W. London, Jan. 25th, 1917. Dear Mrs. Forbes Angus:—I am so glad to tell you of the safe arrival of seven cases which were sent off on December 8th. The Queen desires me to convey to you and all the kind workers Her Majesty’s grateful thanks for these splendid gifts, and the Queen asks me to send special thanks to the Women’s Red Cross and Patriotic Association of Belleville, for the very nice socks which they so kindly sent to Her Majesty’s Guild. Do tell them how useful the socks are as we are asked for such quantities of them for the men at the front.

The Queen desires me to say how much she appreciates your continued help. I wish you could see all the grateful letters we get from the Matrons and the men, and I can only add our grateful and renewed thanks. Yours sincerely, Aimee Dawson. (Lady Dawson) acting Hon. Sec.”

“Wins Military Medal. Spr. Edward Alger, who is now at Crowborough Camp forwarded us, this last week, a copy of the Weekly Mirror dated Mar. 29th. It is full of war illustrations, etc., among others is a picture of our own Frank Houston (Gunner) being decorated by Major-General Turner with the Military Medal, at the Woodcote Park Convalescent Home, Epsom. He with eight others was thus honored on Mar. 21st. Gunner Frank is winning a name and fame for himself. He is a combination of good sound sense, a liberal supply of Canadian wit and has the nerve of the British lion.

His comrades in arms and his officers are proud of this gallant soldier laddie, and so are we all here at home and we are proud to know too, that there are a lot of just such boys as Frank at the front. Tweed News.”