“175,000 Men Asked to Serve on Farms. Ottawa. In an effort to secure farm labor for the present harvest the National Service Board has sent out 175,000 circulars from Ottawa to men who indicated on their National Service cards their willingness to make a change of occupation if the public interest and exigencies of war demanded it.

When the registration cards were returned last spring, more than 300,000 men declared that they would be willing to undertake some essential war work. From these three hundred thousand names has been compiled a list of 175,000 men who are apparently physically fit, and not now engaged in occupations from which they could not be spared, for a time at least, to engage in farm labor. To these men a National Service letter has gone. …  Those who cannot serve at the front are urged to serve the cause at home by helping on the farms.”

“Help Wanted For The Harvest. Mayor Ketcheson is in receipt of the following telegram, which explains itself. Toronto, Aug. 4th. To Mayor H. F. Ketcheson, Belleville, Ontario. The extreme need for help to harvest Ontario crop, leads me to appeal to you to release every possible corporation employee for this work, and to interest yourself in the immediate organization of your municipality to secure harvest help. W. H. Hearst, Prime Minister.”

“Reported Missing. Pte. Harold Wilkins of this city, who was severely wounded some months ago, and who returned to the front after being convalescent, is now reported to be missing. His many friends in Belleville will regret to learn of this, but will hope for the best.”

“Belleville Soldier Killed in Action. Word was received in this city on Saturday from the Record Office conveying the sad intelligence that Pte. Chas. H. Bartlett, of Belleville, had been killed in action. Private Bartlett was well known to many in this city where he had resided for some time. Previous to enlistment he was employed in the Belleville Hardware establishment.

He was a married man, his wife being the eldest daughter of Mr. John McKenna, residing on West James street. In addition to the wife three children survive, the baby having been born since the father went to the front. He enlisted with the 80th Battalion and went overseas with that contingent some months ago. He had only been in France a short time when he was killed. He was a member of Christ Church. The many friends of Pte. Bartlett will regret to learn of his demise and to the bereaved will be extended the heartfelt sympathy of all citizens.”

[Note: Private Charles Henry Bartlett died on July 23, 1917. He is commemorated on Page 197 of the First World War Book of Remembrance.]

“The Waste of War is terrible, but the waste of food in times of peace is colossal. Rich and poor alike eat tons of food that has little food value—and this useless food breaks down the so-called eliminating organs and depletes the physical and mental powers.

Shredded Wheat Biscuit is all food, prepared by a process which makes every particle digested. It is 100 per cent. whole wheat. Two or three of these Biscuits with milk, make a nourishing meal, supplying the greatest amount of energy at lowest cost. Delicious with sliced bananas, berries or other fruits. Made in Canada.”

“10,000 Men Needed Now! Ontario’s Crop Must Be Harvested. Three months ago, in order to avert Famine and World Hunger, the farmers of Ontario were urged to seed every possible acre. To-day, thanks to their response, and favorable weather conditions, we have the result in a record crop of foodstuffs.

As we appealed to the farmers in April and May to plant, so now do we appeal to the employers of labor and their employees for help to harvest this crop.

In comparison with the sacrifices being made by our men in the trenches, the most that any man is called upon to sacrifice in helping with the harvest must be insignificant.

Marson left Belleville with the Signal Section of the 155th Battalion, and was one of the first of that section to be sent to France, and had only been there a short time before he was wounded. The numerous friends of ‘Mars’ will hope that his wounds are not as seriously as stated, and that he will soon recover.”

“Great interest is being shown in Belleville on account of the return visit, which will take place on Wednesday, Aug. 8th, of the Whiz-Bang Troupe. They are booked for the City Hall, and it is fully expected the building will be packed to its limit. The troupe has visited most of the large towns in Ontario almost in every case they have looked again for a return visit.

Every man has been to the front, and they declare they can entertain just as well as they fought. A number of the players were connected with the stage before the war. …  The whole entertainment is in dress, and no reference is made to the conditions overseas, or to the war matters at all. The boys feel they have done their share and they want to forget the horrors they have already passed through.

The first part of the programme takes the part of a minstrel show, and the stage setting is certainly striking. The second part is given up to Vaudeville. …  The popularity of this troupe is proven in the fact that two well known Toronto artists have offered a six months’ engagement to tour the Continent. This offer was turned down by the Military authorities.

A big house is the greatest thing that the boys would like, and an enjoyable evening will certainly be given to all who attend.” 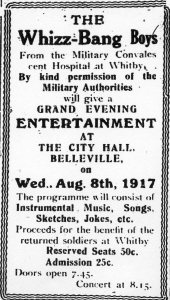 “The Whizz-Bang Boys From the Military Convalescent Hospital at Whitby. By kind permission of the Military Authorities will give a Grand Evening Entertainment at The City Hall, Belleville, on Wed., Aug. 8th, 1917.

Proceeds for the benefit of the returned soldiers at Whitby. Reserved Seats 50¢. Admission 25¢.”