“War Menus. How to Save Wheat, Beef and Bacon for the Men at the Front. Issued from the office of the Food Controller for Canada.

“Supplies for Soldiers. The specifications governing the tenders for military supplies for the battery which will winter in Belleville, embrace a period of four months from October 1.”

“Death of a Hero. Mr. and Mrs. Alfred Danford of Farady [Faraday] Township were officially notified that their eldest son, Pte. Charles Danford, had been killed in action ‘somewhere in France’ on Aug. 15th. He went overseas with the 155th battalion from Belleville and was one of the heroes who helped take Vimy Ridge. He was operating a machine gun and was killed while bravely doing his duty.

During the battle of Vimy Ridge a comrade, Pte. Finton Brownell, was killed while operating this gun and Pte. Danford took his place and kept a constant fire into the German lines till the enemy was routed and the victory won.”

[Note: Private Fenton Brownell of Coe Hill, Ontario died on April 9, 1917. He is commemorated on Page 209 of the First World War Book of Remembrance.]

[Note: Private Charles William Danford died on August 15, 1917. He is commemorated on Page 225 of the First World War Book of Remembrance.]

“If You Hold A 4th Class Engineer Certificate as issued by the Department of Marine or its English equivalent and are a British Subject you are probably eligible for one of the vacancies as Engine Room Artificer in the newly commissioned ships of the Canadian Naval Patrol. It is an effective way to place your qualifications at the service of your country during the War.”

“Tomorrow the Temperance Act will have been in force one year, and the advocates of the reform are well satisfied with the results. Premier Sir William Hearst is especially pleased with the way in which the people have observed the law. …  ‘Reports from all parts of the province indicate the success of the measure as well as the great benefits that are resulting from it. One very gratifying result of the act is the increased efficiency of the workers of this province in every branch of production. …

This is a good thing for the workers and for their families and for their employers as well, and is a great thing for the country at a time when all our energies are required to save the empire from destruction. In this way a patriotic purpose of the highest order has been served.’ ” 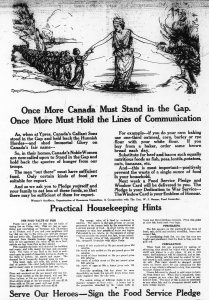 “Once More Canada Must Stand in the Gap, Once More Must Hold the Lines of Communication.

Next week a Food Service Pledge and Window Card will be delivered to you. The Pledge is your Dedication to War Service—the Window Card is your Emblem of Honour.