“Food Card Pledges. This city was yesterday and today canvassed by a number of ladies and Food Controller pledge cards were left in all the houses. In a great majority of cases the signature of the housewife was readily obtained. In many cases it was necessary to make an explanation of the object in signing the cards, which explanation was readily given and had the desired effect.”

“The Medical Board of this city in connection with the Military Service Act is composed of Major Dr. A. E. McColl, Capt. Dr. W. J. Gibson and Capt. Dr. R. Tennent. The Board has been organized and have opened quarters upstairs in the Armouries. The office will be opened for a portion of the forenoon, the latter portion of the afternoon, and in the evening when necessary.

The object of the Board meeting now is to examine those who come under the first draft, namely from 20 to 34 years, before the rush of applicants as will be the case when the proclamation is issued.

Two copies of each man’s medical history sheet will be prepared and the applicant must sign both. One goes to the military headquarters, the other is retained by himself to be attached to his application for service or for exemption later on. …

Under the Act all males between the ages designated must appear before the Medical Board, no matter whether the applicant has previously been rejected or even returned from active service. None whatever are exempt. It is advisable that as many as possible get examined before the Board prior to the proclamation being issued.” 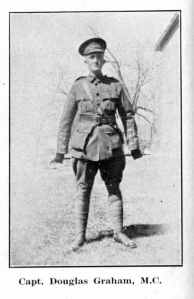 “Lieut. Graham Won Military Cross. In the issue of ‘Canada,’ an English publication, under date of Aug. 25th, 1917, appears the following: ‘Lieut. Douglas Graham was awarded the Military Cross for conspicuous gallantry and devotion to duty in leading forward reinforcements at a critical moment, his energy and determination enabled counter attacks to be driven off, one of which he repulsed practically unaided except by one N.C.O. He personally accounted for six of the enemy and his initiative and gallantry saved a difficult situation. Lieut. Graham is a resident of Sidney Township.’ ” 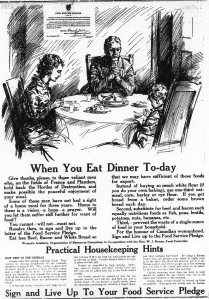 “When You Eat Dinner To-day. Give thanks, please, to those valiant men who, on the fields of France and Flanders, hold back the Hordes of Destruction, and make possible the peaceful enjoyment of your meal.

Some of those men have not had a sight of a home meal for three years. Home to them is a vision—a hope—a prayer. Will you let them suffer still further for want of food? You cannot—will not—must not.

Resolve then, to sign and live up to the letter of the Food Service Pledge.”