“Capt. Harold O. Wilkins, of the Royal Flying Corps, now a prisoner in Germany, writes to relatives in London that he is well, but would appreciate a supply of tobacco, while food of any kind would be very acceptable. Capt. Wilkins is a nephew of Miss Wilkins, Albert Street, and was brought up in Belleville, a graduate of the High School here and an active member of St. Thomas’ Church. …

While flying over the enemy lines one day his machine was badly shattered  in an aerial battle and although he made a gallant attempt to reach the British lines he was obliged to descend about three miles from headquarters and within the German lines. Two minutes after he landed he was surrounded and taken prisoner. Shortly after he had been officially reported as missing a German aviator flew over the British aerodrome to which Capt. Wilkins had been attached and dropped a message stating that the young aviator was a prisoner but in good health, also giving his address.

Since then letters have been received by relatives from Capt. Wilkins confirming the first tidings so kindly conveyed by an enemy aviator. Capt. Wilkins’ many friends in Belleville will be pleased to know that although a prisoner he is in good health and that he will not be permitted to go without food or tobacco goes without saying. His address is as follows: Capt. H. O. Wilkins, Officer Kriegsgefangenen, Lager, Karlsruhe, Germany.”

“Major Miller of 21st Batt. Awarded D.S.O. Acting Maj. A. F. Miller, who went overseas with the 21st Battalion as a lieutenant, has been awarded the D.S.O. In the battle of Lens he, after the Germans had recaptured ground taken by the Canadians, again won the ground back for the Canadians and himself accounted for several Germans with his revolver. His home is in Glen Miller, Ont.” 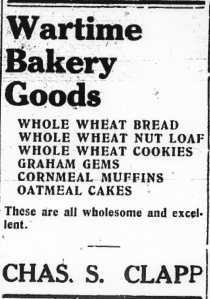