“Christmas Box From The Old School. School Days Recalled to the Soldier By Dainty Box of Christmas Cheer. The following letter to the principal, staff and scholars of Queen Alexandra school from a former pupil now ‘doing his bit’ overseas is interesting:

France, Jan. 3, 1918. Dear Mr. Mott, the Staff and Pupils of Queen Alexandra School: Received the Christmas box which was so kindly sent by the school and I would ask that you convey my sincere thanks to the school and to the ladies who assisted you in packing them. The box came in perfect condition and not a single thing was broken or spoiled.

I was in the trenches when it came to me and as I was feeling very tired it just touched the right spot in more ways than one, and after having such an excellent treat I felt like a new man.

Since coming to France two months ago I have had a great deal of experience and have learned many things which I shall never forget. I have had several close calls but so far I have escaped untouched. I have already met several of the old school boys, among them Gar. Arnott.

At present we are settled down in a small French village where we have things quite comfortable. At present I am taking a scouting course, which requires some study, and this reminds me of my old school days at Q.A.S.

At my first opportunity I shall write you a long letter and explain things more fully. Thanking you all again for your very thoughtful and much appreciated kindness, and wishing the school a Happy New Year, Your old pupil of 1913, PTE. CLINTON BRICKMAN.” 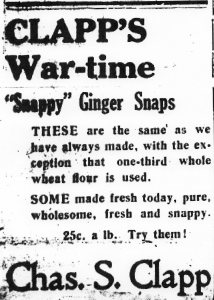 “Clapp’s War-time ‘Snappy’ Ginger Snaps. These are the same as we have always made, with the exception that one-third whole wheat flour is used.

Some made fresh today, pure, wholesome, fresh and snappy. 25¢ a lb. Try them!