“Wednesday, Friday Beefless, Porkless. Ottawa. The food controller’s regulations in respect to the serving of beef and bacon in public eating places have been amended, making Wednesday and Friday of each week Canada’s beefless and porkless days, instead of Tuesday and Friday as heretofore.

The change went into effect on Ash Wednesday, the beginning of the Lenten period. The new regulations extend their restrictions on the use of bacon to pork of all kinds, so that Ash Wednesday was the first beefless and porkless Wednesday throughout the Dominion. 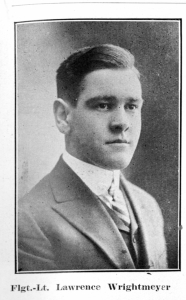 “Belleville Flight-Lieut. Meets Accident. Lieut. L. H. Wrightmeyer went overseas as a private in the 155th Battalion in 1916. He was gazetted Second Flight Lieutenant in the R. F. C. in October last year and has since been actively engaged in coast defence. His parents have received no word from, or of, him since the middle of January, this year, until yesterday, when the following letter from a lady who visited him in hospital was received.

Chichester House, Kemptown, Brighton, England, Jan. 30th, 1918. Dear Mrs. Wrightmeyer, 93 Mill St., Belleville. I have made the acquaintance of your son in the Second Eastern Hospital here and he wishes me to write and tell you that he is doing very well indeed.

I am a mother, too, and feel sincerely for you in this anxious time, so far away, and think a few lines from one who has been with him will be a comfort to you. …  I cannot tell you how splendidly he has behaved or how much he is liked and admired for his courage and fine spirit at the hospital. It is that which has helped to pull him through. He is much better and getting on well—very cheerful and contented and says they are all very good to him. It is beautiful to see his faith and trust in God, and his example and character must do us all good. You may indeed be proud of such a son. He is thinking much of you. Believe me, yours truly, Mrs. Nina H. Butler.”

“Give At Least 10 Days Moving Notice — There is a great scarcity of skilled telephone men through army enlistments.

If you have a telephone and intend moving, we should be notified immediately so that arrangements can be made to move your telephone promptly.

War-time demands have also caused a shortage of all telephone materials. Subscribers are asked to co-operate with us in conserving telephone supplies by ordering only absolutely necessary changes or new installations. The Bell Telephone Co. of Canada.”

“Off To A Training Camp. One hundred and fifty members of the Depot Battalion which has been stationed in Belleville for a few weeks left today for a training camp in the east. The departure of the men from the city was an exceptionally quiet one. A few of the battalion are left here and their numbers will be augmented.” 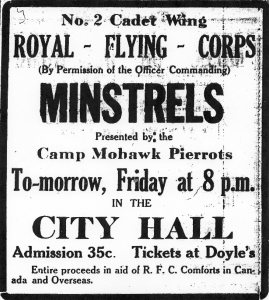 “No. 2 Cadet Wing Royal Flying Corps (By Permission of the Officer Commanding) MINSTRELS Presented by the Camp Mohawk Pierrots.

To-morrow, Friday at 8 p.m. in the City Hall. Admission 35¢. Tickets at Doyle’s. Entire proceeds in aid of R. F. C. Comforts in Canada and Overseas.”