“Married Men of the First Contingent Get Home Leave. Canadian Army Headquarters in France. Early this week the first batch of married N.C.O.’s and men of the First Expeditionary Force left the front on a three months’ furlough to Canada. Altogether, nearly 700 married men have applied for this special veterans’ leave which Canada has made possible by the striking support of its forces in the field.” 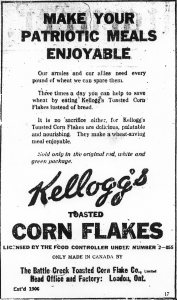 “Make Your Patriotic Meals Enjoyable. Our armies and our allies need every pound of wheat we can spare them. Three times a day you can help to save wheat by eating Kellogg’s Toasted Corn Flakes instead of bread. It is no sacrifice either, for Kellogg’s Toasted Corn Flakes are delicious, palatable and nourishing. They make a wheat-saving meal enjoyable.

Sold only in the original red, white and green package. Kellogg’s Toasted Corn Flakes. Licensed by the Food Controller under Number 2—055.

Only Made in Canada by The Battle Creek Toasted Corn Flake Co., Limited. Head Office and Factory: London, Ont.”

“Camp Mohawk Pierrots Fine Entertainers. If all the members of the Royal Flying Corps prove to be as good experts in dropping bombs, etc., over the enemy’s lines as the Camp Mohawk Pierrots are in presenting a minstrel show, then the success of this branch of military warfare in the great world struggle which at present is taking place is doubly assured.

Of late a number of excellent entertainments have been provided for Belleville audiences but none have been more pleasing than that presented in the City Hall last evening by a number of the members of No. 2 Cadet wing, Royal Flying Corps, of Camp Mohawk.

Many a minstrel show has come to this city and presented a program which was far less meritorious in every respect. It was clean and wholesome and given in a manner that captivated all present. …  Cadet Edwards, who rendered ‘Macushla’ and ‘I Hear You Calling Me,’ was graciously received. The quartette, consisting of Cadets Owen, Edwards, VanNest and Robertson, deserve special mention for the manner in which they presented ‘Keep the Home Fires Burning.’ …  These Pierrots carry a large orchestra which kept everything moving.

The proceeds, which were large, as the auditorium of the City Hall was filled to capacity and overflowing, will be used in aid of the Royal Flying Corps comforts in the Dominion and overseas.”