“Everyone Between 16 and 60 Must Engage in Useful Work. Ottawa. An order-in-Council to suppress idleness has been adopted by the Government. It provides that every male person shall be regularly engaged in some useful occupation, with the exception of persons under sixteen years of age and over sixty, or physically unfit, or a student or temporarily unemployed. …  There are careful provisions against employers using this regulation as a club over the heads of strikers, as these are specifically exempted.”

“Reception to Returned Soldier. A large and enthusiastic meeting was held in the Masonic Hall, Madoc, on Monday night to tender a hearty welcome to Pte. Clifford Gunn who has just returned from overseas. Pte. Gunn enlisted at Madoc, went overseas in October, 1916, proceeded to France where he was shell shocked at Vimy Ridge and invalided to Blighty.

Pte. Gunn, although still suffering from the effects of shell shock, is looking well. There appeared on the platform along with him his father looking his approval of Clifford’s actions and happy in the consciousness of his safe return. Madoc Band was out in full force to celebrate Clifford’s return and a hearty welcome on behalf of Madoc’s citizens was tendered.” 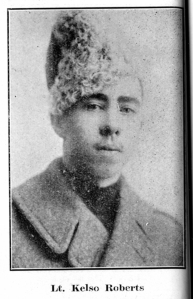 “Lieut. A. Kelso Roberts. A cable received by Mrs. A. A. Roberts, who resides at 159 George St., in this city, conveyed the sad intelligence that her son, Lieut. A. Kelso Roberts, who has been on active service in the war zone, is reported as missing since March 21st. Lieut. Roberts obtained his commission from the Royal Military College at Kingston, and went overseas last September. He enlisted with the Royal Field Artillery in England and had been in France since New Years. His many friends in this city will hope that the more favorable news will soon be received from the popular young officer.”