In many towns and cities organization is all ready well under way. Public schools and teaching staffs have in a large number of instances been placed at the disposal of the registrars. It is the desire of the Government that registration shall be carried out with the least possible interruption of business and with a minimum inconvenience to employees. Provision had therefore been made to permit large industrial and business concerns to register their employees, an officer of the company, foreman of other employees being sworn as deputy registrar. These registrations can take place several days prior to the date of registration, provided the formalities are complied with. …

In addition to the obvious object to be served by thorough and efficient work it is pointed out that if the war continues it may be necessary to have recourse to the rationing system, in which event the facts obtained through registration will be of great value.” 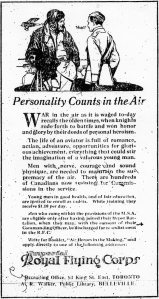 “Personality Counts in the Air. War in the air as it is waged to-day recalls the olden times, when knights rode forth to battle and won honor and glory by their deeds of personal heroism.

The life of an aviator is full of romance, action, adventure, opportunities for glorious achievement, everything that could stir the imagination of a valorous young man.

Men with nerve, courage and sound physique, are needed to maintain the supremacy of the air. There are hundreds of Canadians now training for Commissions in the service.

“Eighteen New Societies Organized By Red Cross. Summary of the work of the Woman’s Department of the Belleville Cheese Board District Branch, C.R.C.S., during the year ending February 28, 1918.

The work of this branch of the Canadian Red Cross Society has steadily increased, eighteen new societies being added the past year. A detailed report of all supplies is given through the press each month. A complete record is kept of all articles received, where despatched and when acknowledged by the hospitals or Canadian War Contingent Association.

To all those who have contributed money and supplies, to the wardens of St. Thomas’ Church for the use of the parish hall for the packings, to the board of the Bridge St. Methodist Church for the basement for the February packing, and to the Ontario and The Intelligencer the thanks of the Woman’s Department are due and are hereby gratefully tendered.”

“Y.M.C.A. Drive. A campaign to raise $6,000 for the Belleville Y.M.C.A. was started in this city this morning, and over forty canvassers were busily engaged taking subscriptions for this worthy object. Last night at the Y.M.C.A. auditorium the canvassers and a few others interested in the work were entertained to a tea, which was provided by the energetic band of ladies who are members of the Y.M.C.A. auxiliary. The spread provided was all that could have been desired, and it is needless to state, was thoroughly enjoyed.

In the absence of the President of the Association, Mr. H. Ackerman, Vice President, presided over the gathering, and briefly outlined the object of the assembly, and also gave some instructions to the canvassers.

Mr. D. V. Sinclair delighted all present when he announced that he had already secured two subscriptions of $500 each, and nine of $100 each towards $3,000 aimed at by large subscriptions. Rev. Dr. Scott, pastor of Bridge Street Church being called upon, gave an excellent and inspiring talk upon Y. M. C. A. work. Brief addresses were also given by others who were present.

The canvassers were abroad at an early hour this morning and the prospects are bright for securing the amount aimed at.”