“Prohibit Exchange of Artificial Limbs. In order to protect returned soldiers who are amputation cases from the competitive attention of the representatives of private manufacturers of artificial limbs, it has been found necessary to pass an order-in-council enforcing strict regulations in the matter of the supply of artificial limbs to such returned men as require them.

It has also been found necessary to attach a strict penalty to any misrepresentations or false statements made by any parties in connection with appliances manufactured and issued by the Government. …

Every returned Canadian soldier, who is an amputation case, is not only provided by the Government with such artificial limb as he may require, but is entitled to have such a limb repaired and, if necessary, replaced during his life-time. …

The order-in-council in question enacts that every artificial limb and appliance manufactured or issued by the Department of Soldiers’ Civil Re-establishment shall be stamped with the words ‘Issued by the Government of Canada.’ …  It is also provided that no person to whom an artificial limb or appliance is issued by the Department shall transfer, exchange or otherwise relinquish such limb except with a written consent of the Minister of Soldiers’ Civil Re-establishment. Any person other than the one to whom such limb or appliance has been issued, who has possession of one or who makes any alteration to it without the consent of the Minister is also punishable.” 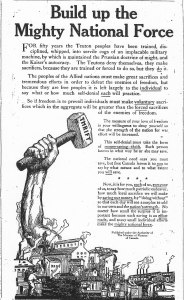 “Build up the Mighty National Force. The people of the Allied nations must make great sacrifices and tremendous efforts in order to defeat the enemies of freedom, but because they are free peoples it is left largely to the individual to say what or how much self-denial each will practice.

The national need says you must save, but free Canada leaves it to you to say by what means and to what extent you will save.

Now, it is for you, each of us, everyone of us, to say how much patriotic endeavor, how much loyal sacrifice we will make by saving our money, by ‘doing without’ so that each day will see a surplus to add to our own and the nation’s strength. No matter how small the surplus it is important because each saving is an effort made, and many small individual efforts make the mighty national force.

Published under the Authority of The Minister of Finance of Canada.”

“$1,500 in Sight. The boys of the Naval Brigade are busy to-day finishing up their Sailors’ Week Collections for the fund being raised by the Naval League of Canada for the widows and orphans of sailors who have fallen victims to the German submarine campaign. Local contributions are expected to reach at least $1,500.

Up to this morning $800 in cash had been paid in to the acting treasurer, Mr. Alexander Ray, who will continue to accept contributions at his place of business, Front street, this evening and Monday. At the request of Toronto headquarters of the Navy League Mr. Ray will look after the collections here. A list of contributors of $25 and upwards will be published.”

“Delivered Coal Without Card. Mr. Thos. Wills, Fuel Controller of this city, is in receipt of the following communication from Mr. C. A. Magrath of Ottawa, Dominion Fuel Controller: ‘I wish to thank you for your letter of the 31st ulto regarding the action of a Belleville coal company charging $12.50 per ton for coal and delivering same without the required card. I have written the company referred to  and am awaiting their reply.”

“Three in the Firing Line. Sergt. Harry Renfrew, who lives at Monteagle Valley, received word on July 16 that his son Walter, in charge of a machine gun, had been wounded in the side of the head by a piece of shell. His comrade was crushed to pieces. He went into a hospital and was back on the firing line again in a short time. He was wounded again on August 19th, this time in the chest but is getting along well. He is in the 3rd battalion with his oldest brother Willie, and he has another brother in the 21st battalion.—Bancroft Times.”

Pte. O’Neil left Belleville with the 254th Battalion, and this is the second time he had been wounded, the first time being a scalp wound. Another brother is also in the firing line. The many friends of Frank in this city will hope his wounds are not of a serious nature.”

“Pte. Keegan Killed. Word was received in the city to-day that Pte. James Keegan had been killed in action. He was the son of Mr. and Mrs. Patrick Keegan, 11 Brock Street. Pte. Keegan’s wife lives at Toronto. He was a young man with many friends who regret his death.”

[Note: Private Thomas James Keegan died on August 29, 1918. He is commemorated on Page 439 of the First World War Book of Remembrance.]

“False Rumor. There was a rumor current on the streets at noon to-day that Pte. W. E. Clarke, son of Mr. and Mrs. E. Clarke, residing on Cedar Street, had paid the supreme sacrifice, but upon investigation it was proved that the rumor was untrue and started through a misunderstanding.”

“For the Widows and Orphans. This is the last day of Sailors’ Week and the fund for the widows and orphans is still far below what it should be. Contributions can be left at the office of Mr. Alexander Ray, Front street, this evening for this worthy object. It is a privilege to help the families of the heroes who have died serving Canada.”

“Lieut. Porter Missing. Mr. E. G. Porter, K.C., M.P., of this city, was this morning in receipt of a message from the Director of Records at Ottawa, which conveyed the sad intelligence that his son, Lieut. Roger Porter had been missing since August 30th.

Lieut. Porter after completing a military course and qualifying as a Lieutenant, enlisted and went overseas with the 155th Battalion from here. After being in England for a time he was attached to the machine gun section of the 2nd Battalion and had been on active service at the front for some time. He is the only child of Mr. and Mrs. Porter and citizens generally will join with The Intelligencer in hoping that better news will soon be received in reference to the brave young officer.” 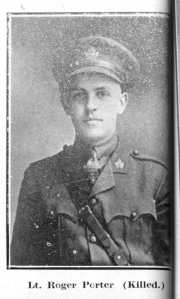 “Lieut. Roger Porter Was Killed In Action Somewhere in France. Following quickly the news that Lieut. Roger Porter, on active duty in France with a machine gun unit, was missing came the dread message that the gallant young officer was dead. Saturday the parents received word that their soldier son was missing, and on Sunday came the cablegram apprising them of his death, killed in action.

Deep sympathy is felt for the parents, Mr. E. Guss Porter, K.C., M.P., and Mrs. Porter, in their sad affliction. Roger was an only son, born in Belleville, and a favorite with everybody by reason of his bright and cheerful nature, his manly character and kindly courtesy to all. When war was declared Roger Porter, although yet in his teens, was determined to serve his King and country but on account of his youth was not accepted. He persevered in his intention, however, and finally accomplished his desire.

Sunday’s cable message was confirmed by a telegram from the Director of Records at Ottawa, this morning.

School Days. Lieut. Porter, who was only 20 years of age, was born in Belleville. After graduating from the public schools he entered the High School in the city, and while a pupil there made a splendid record. Afterwards he went to Upper Canada College, where he became imbued with the military spirit and desired to enlist for oversea service, but his youth prevented him from doing so. Two years ago, however, he achieved his long expressed desire, and enlisted with the 155th Battalion, which was recruited in this city and vicinity, and took a course at Kingston, qualifying as lieutenant.

On October 19th, 1916, he left Belleville with the 155th Battalion for overseas service. After being in England for some time he went into active service, being attached to the machine gun section of the 2nd Canadian Battalion with which battalion he was serving when he made the supreme sacrifice for his king and country.

Lieut. Porter was possessed of a personality which made him many friends while attending school and college, and the news of his death will be sincerely regretted by a host of friends.

During the month of May, 1917, Lieut. Porter was married to a young lady in England, who with a young son survives. The Intelligencer unites with all citizens in extending to the bereaved relatives the sincerest sympathy in this their hour of sore affliction.

His Military Career. …  When his battalion was disbanded in England in 1916, he, with another pal officer from his regiment, at once set about to get to France as soon as possible. This was prevented by some of his senior officers, although he had sought the assistance of persons high in command to attain this end. He was transferred to the Canadian Forestry Corps, on account of his youth, much against his wishes as it was a non-combatant force. From this unit, very shortly after, he secured his own transfer to the Machine Gun Corps, which was then called the ‘Suicide Club.’ He became a very efficient machine gunner, and was an expert rifle and revolver shot.

Lieut. Porter took a deep interest in his work, was exceptionally apt in learning, and had unusual initiative with all kinds of nerve and undoubtedly gave a good account of himself before making the supreme sacrifice.”

[Note: Lieutenant Roger Morrow Porter died on August 30, 1918. He is commemorated on Page 486 of the First World War Book of Remembrance.]

“Soldiers Will Play Rugby. With practically all the old Rugby players overseas, it is necessary to keep the younger boys interested in the grand old autumn game. Prior to the outbreak of war the Ontario Rugby Football Union formed a junior section, made up of two series, as follows:

In addition to the junior series, intermediate and senior series were also in force. The latter was abandoned, however, after war broke out, as was also the intermediate. …  The question of the formation of a series or section for military teams has been discussed, and if this is possible the O.R.F.U. will make every effort to form such a section. There are many Rugby players in the ranks of the soldiers, and there should be no trouble in getting things in working order. In the fall sport is at a standstill, except for Rugby, and with the majority of the players overseas it remains for those at home to keep the sport alive. A meeting of the O.R.F.U. will be called shortly to get things in working order for 1918.”