“Biggest Success Of War Promised. From all parts of the District covered by the local campaign for $5,000 to aid the Canadian Army Huts greatest enthusiasm is being shown by all classes of people. Success is assured. Committees have been organized in the different communities throughout the District. Canvassers have gladly given their services, and business men their time in matters of organization. No stone will be left unturned to make this K. of C. Army Hut Campaign for $5,000 the most successful effort yet made on behalf of the Patriotic Fund.

The slogan ‘Everything Free and Everyone Welcome’ has caught like wild fire. The fact that every dollar subscribed will find its way to our Boys in France without shrinkage, because the administration expenses are paid out of the K. of C. general fund appeals to the patriotic citizen.

Campaign headquarters in Belleville are on the corner of Bridge and Front Sts., Old Balmoral Building, and every citizen of Belleville is cordially invited to make this a rendezvous for the next week.

It is expected and hoped that this will be one of the last sacrifices asked for, therefore should be generously supported. Canvassers have been appointed to call at every home in Belleville, and it is expected that the response will be generous, and worthy of the memory of our gallant heroes in France.”

“Canadian Women And Babies Land. An Atlantic Port. Carrying 1,050 passengers, of whom 700 were women and children, a British liner arrived at this port yesterday. Among the passengers were 100 children under one year of age, and the women were mostly repatriated Canadians who had been prevented from returning home by the activities of the U-boats. The children were cared for on the way across by Lieut. Anna B. Stover, of the Canadian Army Medical Corps, who had handled 300 cases of illness since the ship left the other side.

Among the prominent Canadians on board were Sir Edward Kemp, Overseas Minister of Militia; Sir Clifford Sifton, and Bishop Fallon, of London, Ont., who has been in the fighting zone for five months with the Canadian troops. Bishop Fallon witnessed the advance of Aug. 8, 9, and 10, and said no words could describe the great work done by the gallant Canadians. He said the men were hopeful of seeing the war end with a great victory by next year.” 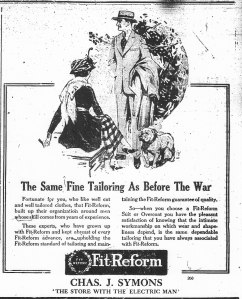 “The Same Fine Tailoring As Before The War. Fortunate for you, who like well cut and well tailored clothes, that Fit-Reform, built up their organization around men whose skill comes from years of experience.

Chas. J. Symons. ‘The Store with the Electric Man.’

Every Dollar You GIVE Goes to Supply Comforts for our Magnificent Fighting Men. IN THE ARMY HUTS. No Creed! Everyone Welcome. No Charge! Everything Free.

Get Together Belleville. No Sacrifice is too Great for those Men who are Fighting Shoulder to Shoulder to make the World fit for us to Live in. Campaign Headquarters Cor. Bridge & Front St. Phone 73.”

“Soldiers for Belleville. It is understood that about two hundred men now with the Depot Battalion at Barriefield Camp will be stationed at Belleville for the winter, being quartered in the Armories there, says a despatch from Kingston. It is probable that if the men are sent to other points they will remain there until the barracks at Barriefield are completed or until they go overseas.”

“Killed in Action. Mrs. J. C. Churchill, residing at No. 7 Station Road, city, received from the Director of Records at Ottawa, this morning a telegram stating that her brother, Lieut. Wm. Frederick Ferguson was on September 3rd killed in action. Lieut. Ferguson enlisted and went overseas with an Ottawa battalion.”

[Note: Lieutenant William Frederick Ferguson died on September 3, 1918. He is commemorated on Page 406 of the First World War Book of Remembrance.]

Pte. Gernon left Kingston with the 39th Battalion, and had been in active service in France for 3 years. He was wounded some time ago, and upon recovering went back into the firing line. Deceased was a nephew of Mr. Brown and lived in Belleville all his life. He had many friends here who will regret to learn of his death. He was employed for some time with the Grand Trunk Railway before enlisting. He was a member of St. Michael’s church and is survived by one brother, Robert, now a mechanic with the R. A. F., and one sister, Mrs. Wm. Burd, residing at Foxboro.”

[Note: Private Richard Joseph Gernon died on August 30, 1918. He is commemorated on Page 413 of the First World War Book of Remembrance.]

“Pte. McHugh Killed in Action. Mrs. Wm. Smith, residing at 12 Ashley street, city, was to-day in receipt of a telegram from Ottawa stating that her brother. Private Frederick McHugh, was killed in action on August 30th. Deceased enlisted and went overseas with a western battalion.”

[Note: Private Frederick McHugh died on August 30, 1918. He is commemorated on Page 458 of the First World War Book of Remembrance.] 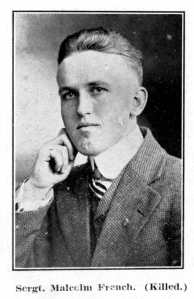 “Made the Supreme Sacrifice. Mr. G. H. French, who resides on Bridge street west, in this city, was this morning in receipt of a telegram from the Director of Records of Ottawa, which conveyed the sad intelligence that his son, and only child, Private Malcolm L. French, had been killed in action on August 30th.

Pte. French enlisted and went overseas with the 254th Battalion from this city. Previous to enlistment deceased was attending Belleville High School. He was an exceptionally bright student, and was deservedly popular with all his companions, who deeply regret to learn of his death. To the grief stricken parents will be extended the heartfelt sympathy of all citizens.”

[Note: Private Malcolm Linford French died on August 30, 1918. He is commemorated on Page 411 of the First World War Book of Remembrance.]