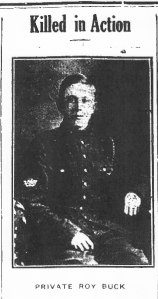 “Killed in Action. Private Roy Buck. A former member of the Ritchie staff, killed in action on September 3, 1918. His mother resides at 18 Everett Street.”

“K. of C. Army Hut Fund Reaches $3,200. With one day left in which to obtain the objective of $5,000 for Belleville District the workers connected with the K. of C. Army Hut Fund are redoubling their efforts to reach that mark. Canvasses are being made night and day, and at headquarters corner of Bridge and Front street, the secretary is on the job all the time. Last night the total had reached $3,200. This is most encouraging. …

To-day and to-morrow canvassers in Trenton will cover the British Chemical Co., where it is expected that a large sum will be realized. This is the first time a direct canvass of these works has been made for any fund, and the committee of the Knights of Columbus Army Hut Fund appreciates the very great favor that is being shown them by the management. The management in turn realizes the very great work that is being done by this Army Hut Fund.

The works of the Canada Cement Plant at Point Anne will also be canvassed this afternoon, through the kindness of the management. If everyone will get together for one more day, Belleville will surpass the $5,000 objective.”

“Pte. Frank Sweet Killed in Action. Uncle of Pte. Howard Black Who Recently Died of Wounds. Mrs. Richard Black, 24 Hillside street, has received the following notice: (413035) Pte. Frank Sweet. Dear madam:—I regret to have to advise you that notice has been received here that the above mentioned soldier has been reported to have been killed in action on the 8th of August, 1918. Yours truly, E. Baker. For Director of S.A. & A.P.

Frank Sweet enlisted with the 39th Battalion in this city, and went overseas with that battalion. In England he was transferred to another unit, and went to France, where he served his country faithfully for over a year as a sharp shooter, and later as military police. He was invalided to England with trench rheumatism and he remained there until April, 1918, when he again went to France and on August the 8th made his supreme sacrifice for King and country. He was the fifth and youngest son of the late Wm. Sweet of Bancroft, and brother of Mrs. R. Black of this city.

“Pte. Howard Black. This family has been doubly bereaved as this is the second loss within a few days. Frank Sweet was an uncle of Pte. Howard Black, whose death from gun shot wounds was previously announced. Howard was a bright and promising student. He received his education at Queen Mary School and was a pupil of the High School when he enlisted at the age of 16 in the bugle band of the 155th Battalion. He was with this battalion while it was in camp at Barriefield, but did not go overseas with it as he was too young.

On being transferred to the Special Corps he was sent to Lindsay as bugler to the Arsenal Guard and volunteered to go with the 252nd Battalion in May of 1917 which battalion went overseas at the same time as the 254th from this city.

In England he attended the Signalling School at Seaford, graduating fourth in a class of fifty. In March of this year he went to France where he very cheerfully and faithfully performed all duties, and September 5th gave up his brave young life for the liberty and peace of all nations. In religion he was a Presbyterian, being identified with John Street Presbyterian church.”

[Note: Private William John Howard Black died on September 5, 1918. He is commemorated on Page 369 of the First World War Book of Remembrance.]

“European Scourge Enters Ontario. Toronto. Spanish influenza which raged throughout large sections of Europe and made serious inroads upon the German armies in France, has made its appearance in Ontario. So far most of the cases reported in the province are in the camp of the Polish Legion at Niagara, and the authorities there have had to place part of the camp in quarantine and confine all the Polish soldiers to barracks.

The disease has already become epidemic in certain parts of the United States, particularly in one or two cantonments, and in order to prevent it getting established here Hon. W. D. McPherson, Provincial Secretary, and Col. J. W. S. McCullough, Provincial Officer of Health, had an extended conference. As a result steps will be taken to warn the public and to circularize all the physicians in the province regarding the matter. …

The disease resembles influenza, the most important symptoms being sudden onset with chills, severe headache with pain in the back and limbs, and a general feeling of malaise. The face is flushed and herpes appears on the lips in some cases. The fever runs from 99 to 102 and occasionally to 103 or 104. The highest point is reached on the second day when there is a sudden drop, and by the fourth day the patient is well. Many cases develop a harsh cough with thick sputum and some develop into pneumonia.

Dr. McCullough stated that the disease is spread by germs carried in the nose and throat and the infection is generally passed from one person to another by direct personal contact, drinking utensils, the use of common towels, etc.

The Provincial Officer urges people to avoid contact with persons with the disease or showing symptoms and those infected are advised to remain in bed and have a physician called.”

“Recommended for Medal. Mrs. A. E. Baldwin, 22 Green St. has received a letter from Nursing Sister L. E. Walker, of the Third Western General Hospital, at Neath, S. Wales, of which the following is a part: ‘I am writing a few lines to you for your husband, who is in this hospital, and who at present is not able to write himself. He was admitted here on August 21st. He had been gassed and was suffering from some burns.

He is now going on well, but his eyes are still very troublesome and he cannot stand the light, and has to have them bandaged up; but you must not worry, he is getting on quite all right, though of course it will take time to get over the effect of the wretched gas the Germans use. The burns take some time to heal, but he is progressing well and steadily, and before long will be writing to you himself.

He would like you to know he got recommended for the Military Medal on the 9th of this month when he went over the top. He sends love to the children and yourself. I must tell you he is a very good patient.’ ”

“S. A. Campaign. The Salvation Army local workers have received much encouragement in their appeal to the public this week, many of the small envelopes being returned without a call being made. There is every indication that the objective will be reached and the good work of the S. A. continued. …

It looks as if Belleville is to lead the list of cities and towns of Ontario in the annual Harvest Thanksgiving financial effort of the Salvation Army. The men in khaki, 32 in number, who were active members or adherents of the local branch, will have the satisfaction that those at home who ‘stay by the stuff’ are also doing their bit. The Salvation Army makes a specialty of helping the wives and children of these men who are away.”

“Soldiers Arrive Today. Two hundred members of the Depot Battalion at Barriefield Camp under Lt.-Col. Smart leave Kingston today for Belleville, and will be quartered in the Armouries until the new barracks at Barriefield are completed. It is thought that the barracks will be finished in eight weeks, and then will be ready for occupation. Four hundred men will shortly be at work at the new buildings at Barriefield and already bunk-houses to accommodate that number have been erected.”

“Killed in Action. On Monday Mrs. G. Thibault residing at 18 Murney street, city, received a telegram stating that her husband, Pte. George Thibault, was reported missing on August 28th. To-day she received a message stating that he was killed in action on the above date. In 1915 he enlisted and went overseas with the 59th Battalion of Peterboro.”

[Note: Private Georges Thibault died on August 28, 1918. He is commemorated on Page 511 of the First World War Book of Remembrance.]

Pte. Casselman enlisted and left Belleville with the 39th Battalion three years ago. Since being on active service he has been wounded five times.”