“Several Thousand Soldiers Arrive. Ottawa. Several ships have arrived at a Canadian port conveying between four and five thousand returned soldiers. Nearly a thousand are ‘hospital walking cases,’ for whom berths have been specially erected in the ships under the supervision of the medical authorities, about 3,300 are ‘ordinary discharge cases,’ and there are three or four hundred soldiers’ wives and children, and 150 officers, who are returning.”

“Deputation Asks City Council for Grant for Salvation Army Overseas Work. At the City Council meeting last evening the business brought forward was transacted in an expeditious manner, the session lasting but an hour. No matters of great moment were brought up. A request from the Salvation Army for a grant towards a campaign in Canada to raise a million dollars to provide comforts for the boys overseas was referred to the Executive Committee.”

“Sunday Gasoline Sales Stopped. Ottawa. Fuel Controller Magrath announces that regulations have now been approved by the Governor-General in Council to control the wholesale and retail sale of gasoline in Canada. …  Provision is also made for the keeping of certain sales records, and all retailers of gasoline are called upon to post in their places of business the wholesale as well as the retail cost of gasoline handled by them. One important provision of the regulations is that for the duration of the war the sale of gasoline on Sundays is absolutely prohibited.”

“In Memoriam. In proud and loving memory of my only son, Sydney Hollgerson, aged 20 years, a member of the 58th Battalion killed in action on the Somme, October 8th 1916.

Supreme and glorious sacrifice, / In great and noble cause to make / He with his life’s blood paid the price / And fought and died for freedom’s sake.” 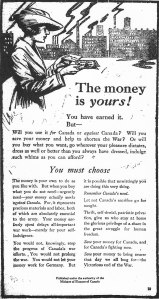 “The money is yours! You have earned it. But—Will you use it for Canada or against Canada? Will you save your money and help to shorten the War? Or will you buy what you want, go wherever your pleasure dictates, dress as well or better than you always have dressed, indulge such whims as you can afford? You must choose.

Published under the authority of the Minister of Finance of Canada.”

“Fighting the Flu. Precautions against the ‘Flu’ have been taken at the School for the Deaf. The pupils are not allowed to leave the grounds without permission and while school is continued the members of the staff are requested not to attend meetings or gatherings of any kind and to do no visiting, but to remain quietly in their homes.

Members of the staff having influenza in their homes are required to report at once and to remain away from the school while there is any danger of them carrying infection. An extra nurse has been engaged and extra hospital accommodation provided.”

“Pte. Wardhaugh Gassed. Mrs. Viola Wardhaugh, Front St., Belleville, has been officially notified that her husband, Pte. Wm. Oliver Wardhaugh, infantry, was admitted to No. 18 General Hospital, Dannes Camiers, France, on Sept. 28th, suffering from the effects of Shell Gas. Pte. Wardhaugh went overseas with the 155th Battalion and his many friends hope that he will have a speedy recovery.”

“Carpet Bowling. At the True Blue hall last evening a well contested match was played between teams skipped by Messrs. B. Kelly and G. W. Kerr of the Belleville Carpet Bowling Club. The match was an exciting one; during the first half, the team skipped by Mr. Kelly held the upper hand, the second half was so skilfully played by Mr. Kerr’s team that the victorious team led by only one point, final scores being 36 to 24. Mr. Kelly’s team won. …  Great enthusiasm was shown by both players and spectators.”

“Pte. Huddlestone Wounded. Mr. Miles Huddlestone, residing on Great St. James street, in this city, was to-day in receipt of the following telegram from the Director of Records: ‘Sincerely regret to inform you 636443, Pte. John Nelson Huddlestone,infantry, officially reported admitted to No. 1 Casualty Clearing Hospital, Sept. 29th, gunshot wound right arm, fractured knee.’ Pte. Huddlestone enlisted and went overseas with the 155th Battalion of this city. He was only 19 years of age. Previous to enlistment he was an employee of the G.T.R. here.”

Dear Mrs. Beaton:—I regret to inform you of the death of your son yesterday, Sept. 2nd, from wounds received in action. I was with a field ambulance at an advanced dressing station when this boy was brought in dead on a stretcher, where he had expired while our bearers were bringing him back off the field where he fell. I read his identity disc at once. It was marked Alexander Beaton, No. 455036, 2nd Battalion East. The stretcher bearers found your name in his paybook.

You will have the consolation of knowing that he was not instantly killed; that he had time for preparation for death and also that our chaplains warned our boys before [going] into this sector of the impending battle and gave them facilities for approaching the sacrament. Your son was wounded in the head. His death resulted apparently from loss of blood.

I am writing to you from the field, and when the action is concluded should I be detailed for burial at the cemetery where he will be interred I shall advise you. Should you wish to have the location of his grave and a photo thereof, you should address ‘Director of Graves Registration & Enquiries, War Office, London, England. The military authorities will of course forward his personal effects to you in due time.

I may add that I felt a special interest in the matter since I left Stirling to come to France. May God bless and comfort you in your hour of bereavement. Yours sincerely, J. J. O’Reilly, Chaplain.”

“ ‘Flu’ Precautions Are Advised by M.O.H. Toronto. Dr. Hastings, Medical Officer of Health, has issued the following statement on Spanish influenza. Influenza is an acute communicable disease, and is contracted by coming in contact with the secretions from the nose, throat, and mouth of a person, who is ill with the disease. For this reason every effort should be made to avoid such contact. …

All persons, especially those engaged in factories, large business establishments, etc., where a number of people are congregated should report on the first sign of illness, and be relieved of their duties. To endeavor to fight off the disease by continuing at work not only renders the severity of the illness more serious, but also exposes others to the disease.”

“Spanish ‘Flu’ Still Spreads. Kitchener. Medical Officer of Health Dr. J. McGillawee, acting under instructions from the Kitchener Board of Health, has issued an order closing all schools, churches, and theatres, and forbidding public gatherings until further notice. This action was taken in an attempt to check the spread of Spanish influenza, which already has claimed twelve victims in the past seven days. Reports from local medical men show there are over 3,000 cases in the city.”