Mary Olevia Wilson was born on Jan 15, 1892 at the farm house at the “front of Sidney Township”, Hastings County, daughter of Francis Wilson and Elizabeth Blakely.

She was educated locally, was a graduate of the Nursing School at the Kingston General Hospital in May 1916 and was soon named the Head Operating Room Nurse. Miss Wilson resigned in Oct, enlisted in the Canadian Army Medical Corps on Nov 1, 1916 and served initially at the Ongwanada Military Hospital in Kingston.

Nursing Sister Wilson went overseas in Mar 1917 and served in the hospitals in Westenhanger, Shorncliffe and Orpington England and then with the # 7 Canadian General Hospital at Étaples, France until the Armistice; she was admitted to hospital in Le Touquet, France with influenza.  Miss Wilson returned to Canada setting sail on Aug 8, 1919 aboard the S.S. Megantic and was discharged on Aug 17, 1919. She followed the practice of her profession at Vancouver and San Francisco before returning to Kingston in 1924 in charge of wards at KGH and to administrative staff. She served as Acting Director of Nursing and was Assistant to the Superintendent of the Hospital until her retirement in July 1961. “Her ability and her personality made staff, students and patients remember her with respect and affection”. 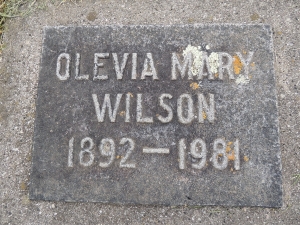 View all posts by donbrearleyvivaldinet