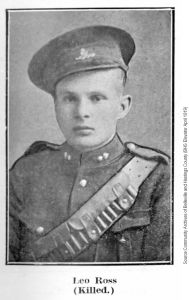 “From Pte. J.V. Ross. Dear wife and family: I saw our dear son’s grave, it was the same as they left him last April, with flowers all around him and the grave kept nice, you couldn’t make any improvements on it. I went during the night, it is about eleven hundred yards from the German front line.

Saw his major, he is a fine man, gave me two guides, one was Mr. Summers the man who buried Leo, and the other was Mr. Chipman, one of the men who was on the gun with him. They, Jimmy McDonald, Davy Thomas, Curly Sharpe (Curly’s twin), Jack Turile, young Day, young Harris, and all of Leo’s friends who were with him. They showed me the place that the gun was in when he got hit.

I picked some wild flowers that were growing on the grave. I will send them in this letter. Our colonel gave me a pass to go to the grave, every one of the officers are gentlemen. It isn’t any trouble for them to do anything for their men. Well I have seen what I came to see and I don’t care how soon the war comes to a close.

I saw Percy River’s grave, it was in good shape, he came from Vancouver. I wish you would write to his father and tell him it was alright and kept in good shape.