“The Khaki Club Reopened. The Belleville Khaki Club which has been closed during the summer, waiting for the arrival of a new battalion, was hastily prepared for an informal opening on Saturday night. Music and refreshments were provided by the Ladies of the Khaki Club and a very pleasant evening was spent.

The formal opening will take place during the week and all men in khaki made welcome.

Khaki Notes. Magazines, cards and games are urgently required, also a piano, the latter being especially needful for the entertainment of the attendants.”

“Recruiting Meeting a Great Success. A recruiting meeting was held at Griffin’s Opera House last evening by the 235th Battalion, which is stationed in Belleville. There was a large attendance, and much interest was manifested in the addresses given, and the selections rendered by the band, under the capable leadership of Bandmaster Murchison, were of a fine order.

The speakers were amongst the best that have ever been heard in this city, on the theme of recruiting.

Capt. McLean, paymaster of the battalion, was chairman, and in opening the meeting said it was a pleasure to be in Belleville. The battalion upon arrival in this city was hospitably received, and the many acts of kindnesses by the citizens were much appreciated, and he desired to thank Bellevillians on behalf of the battalion. They would be in the city during the winter and similar meetings would be held.”

“Profitable Tea by Quinte Chapter. The tea given on Saturday afternoon in the tea-room of the Hotel Quinte by the Quinte Chapter, I.O.D.E., in aid of the British Red Cross Society, was a great success, the proceeds amounting to $182.50.

The programme consisted of songs by Mrs. Wilmot, Mr. Springer and Mrs. Outerbridge, and a reading by Miss Spafford of St. Agnes School. A pretty little picture, painted by Mr. F. Colson of Ottawa, and presented by him to the Chapter, was raffled, the lucky winner being Mrs. A. M. Chapman.”

Following the evening service a short memorial service was held to the memory of the late Captain William H. Hudson, to whom the professor made feeling reference, and Col. Lazier in a brief address spoke of the loss sustained by St. Andrew’s Church lately, so many from the congregation having made the supreme sacrifice for their Country and King.

Speaking of Captain Hudson, Col. Lazier said, that young and popular, and with much to make life desirable, yet when the call came he did not hesitate to take his place among those who voluntarily came forward to defend their King and Empire.” 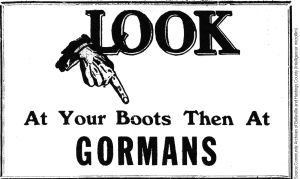 “LOOK At Your Boots Then At Gormans.”