“Pleasing Program At Queen Mary Public School. Last evening a very enjoyable programme was given in the Queen Mary School, under the auspices of the Purple Knitting Circle. The main feature was a most interesting and illuminative address on ‘Russia and the war,’ by Mr. W. S. Herrington, K.C., of Napanee. …

Sergeant Greenwood, of the 235th Battalion, who fought through all that immortal epic of valor and heroism, the retreat from Mons and the Battle of the Marne, who helped to hold the lines at and subsequently fought with the Canadians at St. Julien, Ypres and other points, gave a brief address that touched all hearts. …

Mr. J. Elliott, Manager of the Standard Bank, performed the duties of chairman. …  He warmly eulogized the work of the Red Cross Societies, and said that the men of Belleville were not doing their duty in providing for the comfort of the soldiers as the women are. The ladies of Belleville Red Cross and Patriotic Association have knit over ten thousand pairs of sox, and have made and forwarded vast quantities of other articles, and have, in addition, had to raise most of the money required to carry on this work.

He said it was the duty of the men to provide a fund ample for all the needs of the Red Cross Society, so that the women could devote the whole of their efforts to the work of preparing supplies, and not have to dissipate part of their energies to collecting money for these purposes. He hoped that the men of Belleville would at once take steps to provide such a fund.

During his address Mr. Herrington urged the people not to overlook the needs of the Canadian prisoners in Germany and elsewhere, whose lot is a very sad one. …  He hoped that the ladies would include these in the beneficent work.

The programme, which was greatly enjoyed by the large number present, was opened by the singing of ‘The Maple Leaf,’ …  and was appropriately closed with the National Anthem.”

No further word has been received concerning his brother Raymond who was reported missing on Sept. 12th. The message received was as follows: Ottawa, Ont. Nov. 3. Mrs. H. Hudson, Great St. James, Belleville. 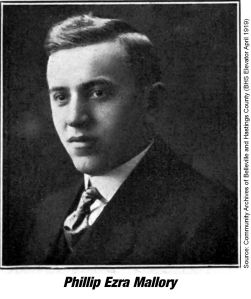 [Note: Private Philip Ezra Mallory died on October 9, 1916. He is commemorated on Page 131 of the First World War Book of Remembrance.]

[Note: His brother, Private Arthur Burnham Mallory died on September 7, 1916. He is commemorated on Page 131 of the First World War Book of Remembrance.]

“Recruiting, while showing a falling off during the past two weeks compared with the preceding two weeks, is regarded in military circles as fairly satisfactory for this season of the year.

It is expected that when cold weather sets in, and it is too unpleasant to hang around street corners, there will be an impetus to recruiting. This has been the experience in past seasons. Labor, too, is not so plentiful in the winter, and rather than remain idle the industrious young man will enlist.

One thing that the recruiting officer is up against is the disloyal action of some parents who allow their boys to enlist and then in the spring demand their release on the ground that they are under age. …

It costs the Government about $500 to feed, clothe and train each recruit for six months, and this money is thrown away if at the end of that time an unpatriotic parent secures the release of his boy.”

“Former Belleville Boy Killed in Action. Mrs. E. B. Mullett, of the city received word that her nephew, Arthur Westover had been killed in action.

Arthur was born and brought up in this city but moved with his parents to Toronto, where he enlisted, proceeding overseas about a year ago. The young man while here was a member of the 49th ‘Hastings Rifles’ and was well known among a large circle of friends who will regret to learn of his death.”

[Note: Sergeant Arthur Emerson Westover died on October 20, 1916. He is commemorated on Page 180 of the First World War Book of Remembrance.]

“Successful Silver Tea. The Choir Comfort in connection with Christ Church, yesterday afternoon and evening held a silver tea at the residence of Mrs. G. L. Tickell, 181 South Charles Street. It proved to be an enjoyable and profitable function. From four to nine o’clock many visited the home and contributed to the worthy object. Upwards of $50 was secured, and this will be devoted in securing comforts for the boys of Christ Church, who are overseas.

The interior of the residence was tastefully decorated for the occasion, and presented a most inviting appearance. During the evening a delightful programme, which was varied in its character, was rendered. Miss Jennie Bishop and Miss Fannie White delighted all present with recitations and solos by members of the choir were rendered.”

“The 235th Muddle. No little excitement and dissatisfaction exists, not only in Belleville, but in Bowmanville, and Cobourg, arising out of the muddle, which exists in connection with the removal of the 235th Battalion from one place to another in search of winter headquarters for the 235th Battalion.

Belleville was known at Military headquarters in Ottawa to have ample and commodious accommodation for one or two battalions, and for that reason, it is presumed, was selected for the winter quarters of the 235th Battalion.

This decision on the part of the Military authorities gave offense to other localities, which desired the presence of the corps in their cities, and towns. This was a laudable desire on their part, but not securing them, does not justify the spleeny attacks now indulged in upon the people and public men of this city. …

On the arrival of the corps, everything possible was done to make the stay of officers and men in our city, as pleasant and comfortable as possible. The Battalion had been in quarters but a few days, when the city was startled to hear of an order having been issued for their removal back to Cobourg.

Not knowing the reason for the issuing of such an order, Messrs. Northrup, M.P. for East Hastings, and Sir Mackenzie Bowell took the train for Ottawa, [to] meet the Minister of Militia, explained the case to him …  and he at once countermanded the order for removal.

The officers and men …  proceeded vigorously in organizing a recruiting campaign, and were successfully securing men, when a peremptory command was given to stop recruiting ‘forthwith.’ …

The reason subsequently given was that the 235th Battalion were trespassing upon forbidden territory, that the County of Hastings was to be the special hunting ground of another Battalion, which was to be organized, and that there was not room for two. …

We had the Battery, the 80th and the 155th all recruiting at the same time in this city and county, and no friction existed. …

The last order received by Col. Scobell is to send a part of the Battalion to Cobourg for winter quarters accompanied by a cancellation of the order to stop recruiting. This is as it should be, as it will enable the colonel in filling his ranks. There are plenty of young men to fill his ranks, and also those of another battalion.”