“Pte. J. Murphy Killed. Marmora Herald. After only eight weeks in France, Pte. Joseph Murphy was killed while resting three miles behind the trenches, October 25, according to a letter received from the adjutant of his battalion by Pte. Murphy’s uncle, Mr. J. F. Deadley, 12 Grenadier road, superintendent of the Mimico division of the Toronto and York Radial Railway.

Pte. Murphy was 18 years old when he enlisted with the 80th Battalion in Belleville. He had only graduated from school. He went overseas in June, and reached the front with the draft to another unit.

The message from the trenches reads:—I am directed by the officer commanding to express to you on behalf of himself and all ranks under his command, the sympathy of all, on the occasion of the death of Pte. J. J. Murphy which occurred yesterday. In company with three companions he was just outside his dugout, when an enemy high explosive shell exploded about ten feet away, killing instantly the whole party.

‘For some days Pte. Murphy had been employed as a battalion runner being especially recommended for that important duty, and I am pleased to say that his work in that capacity was very commendable.

A funeral service was conducted in the afternoon, attended by the officers and men of the unit. In his death the unit has sustained the loss of a well-conducted soldier, and one who was ever willing to do his duty most cheerfully.’ Deceased was a brother of Pierre Murphy, of Marmora township.”

[Note: Private John Joseph Murphy died on October 25, 1916. He is commemorated on Page 140 of the First World War Book of Remembrance.]

This makes the third Crookston boy who makes the supreme sacrifice. The others were reported killed a few weeks ago. Private Blair enlisted last winter with the 80th at Belleville making the remark at the time ‘that he would get to France sooner by enlisting with that Battalion, than with the 155th’ who were recruiting at the same time.

Only three weeks ago Mrs. Blair lost her eldest daughter by death and now comes the sad news of the eldest boy and the bread-winner of the family, going down in the firing line in France.”

[Note: Private John Blair died on November 11, 1916. He is commemorated on Page 55 of the First World War Book of Remembrance.]

“Copy of Cablegram Received by Organization of Resources Committee. The King’s Message.

The work of mercy jointly carried out by the British Red Cross Society and the Order of St. John of Jerusalem has evoked among my people the deepest feeling of gratitude and pride. From what I have seen at home and at the front I fully appreciate the splendid work the Society has accomplished.

As it is only by a United Kingdom that victory will be secured so for the relief of those who suffer in its attainment must we stand equally united. I have great pleasure in giving five thousand pounds as a donation to the Fund upon the resources of which there must be ever increasing demands. (Signed) GEORGE R. I.”

[Note: George R. I. stands for “Rex Imperator” or “King and Emperor.”] 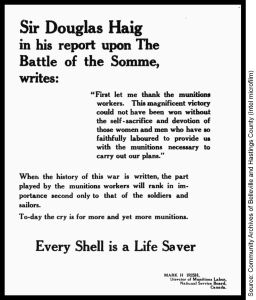 “Sir Douglas Haig in his report upon The Battle of the Somme, writes: ‘First let me thank the munitions workers. This magnificent victory could not have been won without the self-sacrifice and devotion of those women and men who have so faithfully laboured to provide us with the munitions necessary to carry out our plans.’

When the history of this war is written, the part played by the munitions workers will rank in importance second only to that of the soldiers and sailors. To-day the cry is for more and yet more munitions.

Every Shell is a Life Saver.