“Christmas Dinner, Monday, December 25th, 1916. The following list of good things is the menu of Christmas Dinner to be served to the men of the 235th Battalion at their barracks on Monday. It is evidence of care and interest that is being taken in the men by the officers who have been untiring in their efforts to make it a huge success. 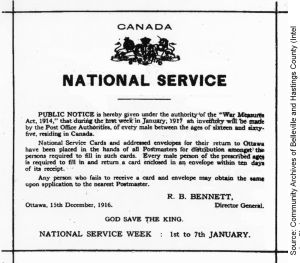 “Canada National Service. Public Notice is hereby given under the authority of the ‘War Measures Act, 1914,’ that during the first week in January, 1917, an inventory will be made by the Post Office Authorities, of every male between the ages of sixteen and sixty-five, residing in Canada.

National Service Cards and addressed envelopes for their return to Ottawa have been placed in the hands of all Postmasters for distribution amongst the persons required to fill in such cards. Every male person of the prescribed ages is required to fill in and return a card enclosed in an envelope within ten days of its receipt.

Any person who fails to receive a card and envelope may obtain the same upon application to the nearest Postmaster. R. B. Bennett, Director General. Ottawa, 15th December, 1916.