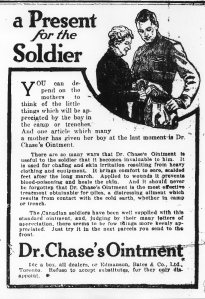 “a Present for the Soldier. You can depend on the mothers to think of the little things which will be appreciated by the boy in the camp or trenches. And one article which many a mother has given her boy at the last moment is Dr. Chase’s Ointment.

The Canadian soldiers have been well supplied with this standard ointment, and, judging by their many letters of appreciation, there seems to be few things more keenly appreciated. Just try it in the next parcels you send to the front.”

“Mohawk Aviators Visit Bancroft. The citizens of Bancroft and many from the surrounding country had a splendid opportunity on Monday last of viewing an airplane at both long and short range, when a machine from the Mohawk aviation Camp at Deseronto passed over here and made a landing in Mr. Herman Kelusky’s field, a couple of miles north of the village.

The birdmen made their appearance here shortly before noon and were flying over the village in search of a landing place; they continued northward, and found what they were looking for on Mr. Kelusky’s farm. The machine was in the charge of Flight Lieuts. Drewry and Blackmore. The latter is a brother-in-law of Mr. Foster, manager of the graphite mine, near Maynooth, and was going to spend the day with his wife, who is camping at Papineau Lake.

The trip from Deseronto here a distance of about ninety miles, occupied one and a half hours. They were delayed here about three or four hours, and everybody quit work and went out to witness the ascension and get a good view of the aircraft that is playing such an important part in the present war. The return trip was made on Tuesday, but the plane was flying very high and far to the east when it passed here.—Bancroft Times.”