“Sent Christmas Cheer to the Soldiers. Chatterton. Will you allow us space in your paper to thank all who so kindly contributed to our Christmas box fund for the boys overseas. House to house canvass $33.37. We also wish to thank Mr. and Mrs. R. N. Bird, for so kindly opening their house for a social evening which realized us $24.10.

Our grateful appreciation is due Mr. Stillman, Gay, Foxboro, and Mr. J. Morton, of Stirling, for their liberality in their dealings with us.

“Recovered from Wounds. Corp. Jack Summers, of Belleville, who has been a patient in an English military hospital for some time being treated for gunshot wounds, has recovered and returned to active service. Mrs. M. Summers, 36 Hillcrest avenue, city, has received the following official telegram from Ottawa:

“Many Eligibles Examined. The Militia Medical Board of this city, has been exceptionally busy the past few days in examining eligibles who come under the first draft of the Militia Service Act. Upwards of 1200 have been examined, the great portion of whom were placed in Class A. Of this number over 100 have applied at the post-office here for exemption papers. Not a person has yet applied for an active service paper.”

All this is pure giving, for no refreshments of any sort were offered nor were any ‘good’ eats for sale, yet there was filled a large clothes basket with comforts, and sufficient money to defray all postage.

“Pleasing Musical Event. The Organ and Song Recital in Bridge Street Church on Saturday was fairly well attended and greatly enjoyed. Mr. V. P. Hunt, who arranged the recital, contributed the organ solos, and the beautiful Casavant organ was heard to advantage. …

Mrs. Ella Sipson Bowerman, teacher of singing at Albert College and contralto soloist in Bridge Street Church delighted the audience. …  Mrs. Bowerman has a contralto voice, with a great range and pleases by her beautiful tone, distinct enunciation and charming unaffected manner.

The collection was given to help send Christmas cheer to the many Albert College students at the front, some two hundred and thirty of whom are fighting for their country.” 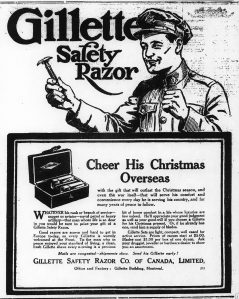 “Gillette Safety Razor. Cheer His Christmas Overseas with the gift that will outlast the Christmas season, and even the war itself—that will serve his comfort and convenience every day he is serving his country, and for many years of peace to follow.

“He’ll Be Happy When He Gets This. Whether ‘Jim’ is on a man-of-war or in a trench, he’s going to have long-lasting enjoyment and a lot of benefit from Wrigley’s The Famous Chewing Gum.

It’s one of the outstanding features of the war—with its tonic effect on stomach and nerves—its welcome refreshment in time of need.”