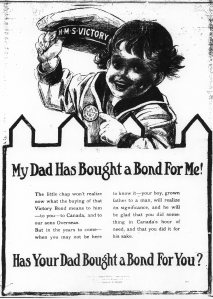 “My Dad Has Bought a Bond For Me! The little chap won’t realize now what the buying of that Victory Bond means to him—to you—to Canada, and to our sons Overseas.

But in the years to come—when you may not be here to know it—your boy, grown father to a man, will realize its significance, and he will be glad that you did something in Canada’s hour of need, and that you did it for his sake.

Has Your Dad Bought a Bond For You?”

“Memorial Services. In St. Thomas’ and St. Andrew’s churches last evening memorial services were held for fallen heroes. Ven. Archdeacon Beamish, the rector of the former church conducted the service and spoke feelingly of the sacrifices made by the Bellevillians in the great struggle.”

“ ‘Y’s’ Parlor Meeting. The ‘Y’s’ held their second parlor meeting of the season at Mrs. C. Townsend, Foster Avenue. The evening was spent making scrapbooks for the soldiers, and in discussing the way in which the ‘trinket campaign’ for thirst-quenchers for the soldiers would be best conducted.

The committee appointed to look after the study of the franchise for the coming winter, discussed methods for the best carrying out of the work. This will be actively undertaken before the December elections.”