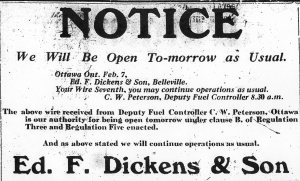 The above wire received from Deputy Fuel Controller C. W. Peterson, Ottawa is our authority for being open tomorrow under clause B. of Regulation Three and Regulation Five enacted.

And as above stated we will continue operations as usual. Ed. F. Dickens & Son.”

“Patriotic Concert Great Success. The City Hall was last evening filled to overflowing with citizens, who assembled to hear a grand concert, which was given by local talent. The object of the entertainment was to procure funds for the Red Cross and Patriotic Association of the city and a goodly sum was realized.

Mayor Platt had been requested to preside, but owing to other engagements was unable to be present all the time, but opened the proceedings with a brief and appropriate address. He referred to the worthy object of the concert and wished the ladies every success in the worthy object they were engaged in.

At the conclusion of the programme, Mrs. F. E. O’Flynn, on behalf of the organization, thanked all who had contributed to the programme and especially Mr. Knight McGregor, whose selections were one of the chief features of the evening. He was in fine voice and his numbers were beautifully rendered.” 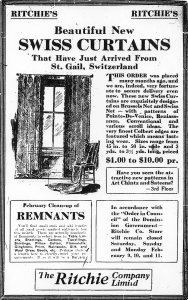 In accordance with the ‘Order in Council’ of the Dominion Government—Ritchie Co. Store will remain closed Saturday, Sunday and Monday February 9, 10, and 11.”