“Address of Parcels For War Prisoners. Ottawa. The German Authorities have issued a memorandum to the effect that parcels for Prisoners of War interned in Germany must be addressed to the ‘parent’ (or main) camps to which the prisoners belong and must not bear the names of any branch or working camps or any other place to which the prisoner might be detailed for special services.

The memorandum states that prisoners who have been detailed for services outside the ‘parent’ camps have been enjoined by the German Authorities from the very first, to inform in this sense any relations or other persons from whom they expect to receive postal parcels. Parcels for Prisoners of War in hospitals also come within the meaning of these regulations.

In the interests of the prisoners it is therefore essential that these regulations should be strictly adhered to as otherwise the German Authorities will not deliver the parcels to the Prisoners of War for which they are intended, and it is suggested that persons in Canada when writing to prisoners in Germany should ascertain definitely the name of the ‘parent’ (or main) camp so that they can comply with the regulations of the German Authorities in addressing parcels to prisoners. R. M. Coulter, Deputy Postmaster General.”

“Daddy, What Did You Do in the War? ‘Peptimism’ is a new word coined by one of the speakers of the War Lecture Bureau in connection with the Greater Production Movement. Pessimism is creeping in and there is need of a liberal injection of ‘Peptimism’ to get the people right up on their toes again purged of war weariness and determined to make Canada’s participation in the war a living sacrifice of joy from the grass roots up with everybody trying to do their bit—a big bit if possible—but even a little bit.

One thousand speakers all over Canada have volunteered as ‘Five-Minute-Men’ and in five minute rapid-fire talks will spread the gospel of ‘Peptimism’ in theatres, movies, concerts and public gatherings of all kinds.

Mr. Frank Yeigh is the officer commanding the ‘Five-Minute-Men’ Battalion and as he is a human dynamo of condensed force it looks as if the movement would accomplish all that is intended.

Pro-German and Pacifist influences are working quietly in Canada—the poison is being introduced in various ways, but the Five-Minute-Men are prepared to inoculate the people against infection. The end of the war is in sight, but if that end is not to be the end of freedom the final effort of the Allies must be the greatest.

The biggest question for the Stay-at-Homes is food production. How about that back-yard garden? Are you studying the seed catalogues and reading up on intensive farming? Wake up and get in the game! 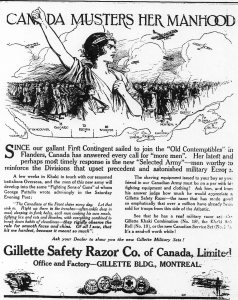 “Canada Musters Her Manhood. Since our gallant First Contingent sailed to join the ‘Old Contemptibles’ in Flanders, Canada has answered every call for ‘more men.’ Her latest and perhaps most timely response is the new ‘Selected Army’—men worthy to reinforce the Divisions that upset precedent and astonished military Europe.

The shaving equipment issued to your boy or your friend in our Canadian Army must be on a par with his fighting equipment and clothing! Ask your Dealer to show you the new Gillette Military Sets!

“Patriotic Concert. At St. Andrew’s Church, Gilead, Thurlow township, last evening, under the auspices of the Red Cross Union Jack Circle of Gilead, a concert was held, which was largely attended. A splendid programme was provided and thoroughly appreciated by all present. Mr. W. C. Mikel, K.C., of this city was chairman filling the position in a most acceptable manner.”

Pte. Lancaster lived in Belleville and was a sergeant-instructor in the army, which position he relinquished to go to France in November last as a private.”

“S. A. Tag Day. The Salvation Army with the assistance of those interested in war work have been selling ‘Tags’ today in aid of their ‘Soldiers’ Huts and Comforts.’ It is to be hoped that a goodly sum will be realized. A collection was made in the public schools in the city, which netted over $131.00.

“15,000 Boys Needed in Ontario. Food is the crucial need of the Allies today. In England well-to-do people are standing in line for their food supplies. In France, the bread ration has been reduced. Surely every boy between the ages of 15 and 19 is old enough to realize his grave responsibility in this crisis, and will enrol immediately with the S.O.S. Soldiers of the Soil.

Of course wages will be paid. Boys earned from $12.00 to $30.00 a month and board last season. But the soldiers in the trenches never considered money—they went. You’re made of the same good stuff. You’ll go, too.