“Canadian War Machine Will be Speeded Up at Once. Ottawa. Drastic changes will be made in the Military Service Act. All exemptions to men between 20 and 23 will be cancelled and they must report for duty. …  The urgency of the demand for reinforcements to meet the Hun peril at the front, and the failure of the cumbersome machinery provided by the Military Service Act to supply these reinforcements quickly have necessitated the virtual wiping out of the whole machinery of the act and the substitution at once of a direct call to the colors of all unmarried young men physically fit for military service between the ages of twenty and twenty-three. …  It is believed that these young men can be spared with the least disturbances to agriculture and other essential industries. …

The old order is to be reversed. The men are now to be called up and exempted afterwards in exceptional cases instead of calling them only after the exemption process of the selective draft with all its consequent delays has been operated.”

“Presented With a Ring. Mr. Norman Dawkins, of this city, who is about to leave here for overseas service, was presented with a Masonic ring on Tuesday evening at a special meeting of Eureka Lodge, A.F. and A.M., by members of the lodge with which he is identified. 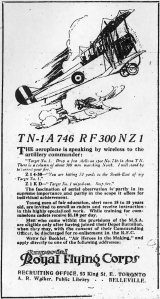 “The fascination of aerial observation is partly in its supreme importance and partly in the scope it offers for individual achievement.

Young men of fair education, alert men 18 to 30 years old, are invited to enroll as cadets and receive instruction in this highly specialized work. While training for commissions cadets receive $1.10 per day.