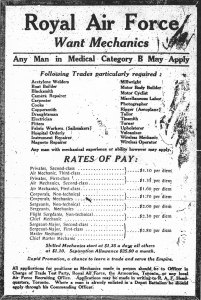 Rapid Promotion, a chance to learn a trade and serve the Empire.”

Sergt. Spargo kindly came from Kingston and gave two songs. The generous collection contributed, amounted to fifteen dollars, which will be sent in the form of parcels through the Red Cross Society to Canadian prisoners of war, as a gift from the class.”

“Invalided Home. Sergt. E. Smith and Privates W. Hogan, J. E. Little and S. Jones have returned to their homes in this city and vicinity. The quartette were welcomed home by Mayor Platt and other citizens. They had been overseas for some months and all were invalided home.”