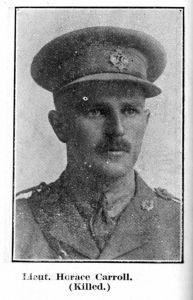 “Unveiling of Tablet to a Departed Hero. At Christ Church during the Easter morning service, a beautiful brass tablet, placed in position to commemorate Horace Yeomans Carrol, who was killed somewhere in France, on October 21st, 1916, was unveiled. The Rector Rev. Dr. Blagrave, officiated. The service was brief, but impressive. …

The inscription upon the tablet is as follows: Pro Patria. In loving memory of Horace Yeomans Carroll of the 77th Battalion, Ottawa. Who gave his life for Canada and liberty at Regina Trench Somewhere in France October 21st 1916. Erected by his mother and brother Lieut. J. C. Carroll. ‘For all our beauty and peace and joy We will owe to our lads, like you.’

[Note: Lieutenant Horace Yeomans Carroll died on October 21, 1916. He is commemorated on Page 64 of the First World War Book of Remembrance.]