“ ‘Sons of Soil’ in Khaki Uniform. Ottawa. The Canada Food Board has approved of a standard uniform for the older boy soldiers of the soil, who are being enlisted this week in most of the Provinces for service on the farms. The uniform is smart and at the same time well suited to farm work. It consists of the shirt and pants of militia khaki with brass S.O.S. buttons. They will be sold to the boys, by retailers, at $3.50 per suit, or separately at $1.70 for the shirt and $1.80 for the pants. In addition to the suit the uniform will also consist of a harvester straw hat, pinned up at one side with a one-inch red, white and blue band.

The appearance of the entire uniform is neat and attractive, despite the fact that little regard has been had for its ability. The Board has also approved of the bronze badge of honor which will be awarded to every soldier of the soil who completes three months of satisfactory service on a farm this year. The badges will be presented during the summer at public gatherings. All boys between the ages of thirteen and nineteen are eligible for the badges.” 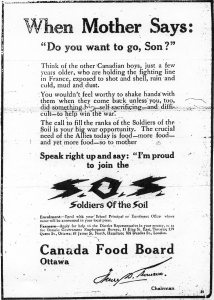 “When Mother Says: ‘Do you want to go, Son?’ Think of the other Canadian boys, just a few years older, who are holding the fighting line in France, exposed to shot and shell, rain and cold, mud and dust. You wouldn’t feel worthy to shake hands with them when they come back unless you, too, did something big—self-sacrificing—and difficult—to help win the war.

The call to fill the ranks of the Soldiers of the Soil is your big war opportunity. The crucial need of the Allies today is food—more food—and yet more food—so to mother

Speak right up and say: ‘I’m proud to join the S.O.S. Soldiers of the Soil.

“Home on Furlough. In addition to the names published in The Intelligencer yesterday of returned heroes others arriving here were gunners Geo. Hope and Harry Dillnut, Ptes. Geo. Lancaster and Jas. Gordon, all of whom were members of the 1st Canadian contingent. The two former left Belleville with the 34th Battery and both saw considerable fighting. Pte. Leslie Gordon, of this city, who went overseas with the 59th Battalion also arrived home.”

“ ‘First Men’ Arrive. Mayor Platt, Col. Ponton, and Richard Arnott, constituted a civic reception committee which welcomed returned soldiers arriving in Belleville yesterday on the G. T. R. flyer. Among a number who left the train here was George Lancaster, one of the original ‘First’ who left here when the war began. He gained fame and honor as the Bomber of the 2nd Battalion in which capacity he gave Fritz many an uneasy moment, and was the father of many military funerals behind the Hun lines. Bomber Lancaster crossed the sea with Major Dick Ponton and Major Ed. O’Flynn. He has two brothers in France, one of whom is now in hospital with fifteen wounds.

Other returned men greeted by the representatives of the citizens were Pte. Oulson, of Allisonville, a member of the 2nd Battalion and a ‘First’; Corp. Hill, of Madoc, with the 21st Batt., Pte. Anson, of the 59th Batt., and several of the 155th boys going to Campbellford.”